Chelsea take on Bournemouth at Dean Court on Saturday evening. Here is the side we think Antonio Conte will pick for the game:

Chelsea will be desperate for a win in order to keep in touch with the league leaders when they take on Bournemouth at Dean Court on Saturday evening.

Goalkeeper: Thibaut Courtois was given a rest in midweek with Willy Caballero coming in between the sticks but the Blues No.1 should be recalled on Saturday.

Defence: David Luiz was also given a breather during the League Cup win over Everton but he should be recalled with young defender Andreas Christensen making way.

Antonio Rudiger and Gary Cahill could both keep their places at the back if Conte decides to play Cesar Azpilicueta out wide again.

Midfield: Victor Moses remains out with a hamstring injury and Davide Zappacosta started in the right wing-back role against Everton. However, I think Azpilicueta will start this weekend.

Marcos Alonso is almost certain to replace Kenedy on the left after being given a well-earned breather in the League Cup while Chelsea’s problems in central midfield seem to have eased.

Danny Drinkwater made his long-awaited debut in midweek after recovering from a calf injury but I don’t think he’ll be asked to play again so soon. N’Golo Kante was back in training today but it remains to be seen whether Conte feels he’s ready to start just yet after several weeks out.

Therefore, Cesc Fabregas and Tiemoue Bakayoko should get recalls in the middle of the park after being rested against Everton.

Attack: Michy Batshuayi put in another solid shift last time out having proved to be the match-winner off the bench last weekend. However, Alvaro Morata is almost certain to get a recall up front.

Willian scored a lovely got which turned out to be the winner against Everton but we may see the Brazilian international dropping to the bench with Eden Hazard and Pedro coming in to the attack. 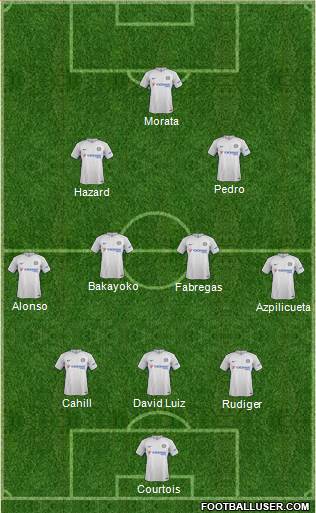