Conte To Make 2 Changes: Predicted Chelsea XI vs AS Roma

Chelsea can book their place in the knockout stages when they take on Roma on Tuesday evening. Here is the side we think Antonio Conte will pick for the game:

Chelsea can book their place in the knockout stages of the Champions League with a win when they take on AS Roma on Tuesday evening.

Goalkeeper: Thibaut Courtois is certain to keep his place between the sticks tomorrow night with Willy Caballero once again named on the bench.

Defence: Gary Cahill is set for a recall at the back as the skipper was rested for the 1-0 win over Bournemouth at Dean Court on Saturday evening.

Antonio Rudiger is perhaps the man most likely to make way as David Luiz and Cesar Azpilicueta are expected to keep their places in the back three so the German international could miss out against his former side.

Midfield: Victor Moses remains out with a hamstring injury so Davide Zappacosta could keep his place in the right wing-back role while Marcos Alonso is expected to once again line-up on the left.

N’Golo Kante is back in full training after recovering from a hamstring injury that’s kept him out for the last five games and Conte will make a late decision over whether to start the French international.

He might be tempted to hold him back for Sunday’s huge clash with Manchester United but I think Conte may start Kante as it will allow the Blues boss to play a tight three-man midfield away to a dangerous Roma side.

Danny Drinkwater is unlikely to force his way in to the starting eleven so I expect Tiemoue Bakayoko and Cesc Fabregas to keep their places alongside Kante.

Attack: The switch in formation would see Pedro drop out as Eden Hazard is almost certain to keep his place in the attack with the Belgian international supporting Alvaro Morata up front.

Michy Batshuayi and Willian will most likely be named on the bench once again. 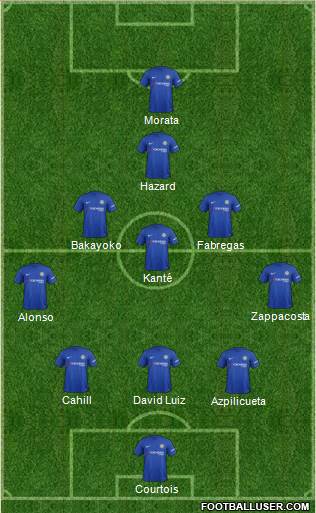