Liverpool take on Maribor at Anfield on Wednesday night. Here is the side I think Jurgen Klopp will select for the game:

Liverpool will be looking to boost their Champions League qualification hopes with a win when Maribor arrive at Anfield on Wednesday night.

Goalkeeper: Simon Mignolet kept his place at the weekend despite his poor showing against Tottenham but Klopp has confirmed that Loris Karius will once again start between the sticks – just as he’s done in all previous group stage games this season.

Defence: Dejan Lovren missed the Huddersfield game on Saturday after picking up an injury during the pre-match warm up and the centre-back is set to miss out tomorrow night after failing to train today.

That means Ragnar Klavan is expected to start alongside Joel Matip and Trent Alexander-Arnold could come back in at right-back with Joe Gomez picking up a knock at the weekend.

Midfield: Jordan Henderson could be given a rest with James Milner starting in the centre of the park while Emre Can is expected to be handed a recall after being named on the bench at the weekend.

Adam Lallana is edging closer to making his long-awaited comeback from a thigh injury but he’s not due to return until after the international break so Gini Wijnaldum should keep his place in midfield.

Attack: Philippe Coutinho is not expected to be risked after missing the Huddersfield win with an adductor injury and he didn’t take part in full training with the rest of the squad today.

Roberto Firmino could be given a breather so Alex Oxlade-Chamberlain might be given a rare start in attack with Mohamed Salah keeping his place on the opposite flank.

Daniel Sturridge will be hoping to lead the line up front once again after scoring at the weekend but Dominic Solanke is pushing for a recall. Sadio Mane remains out with a hamstring injury but he’s pencilled in to return next month. 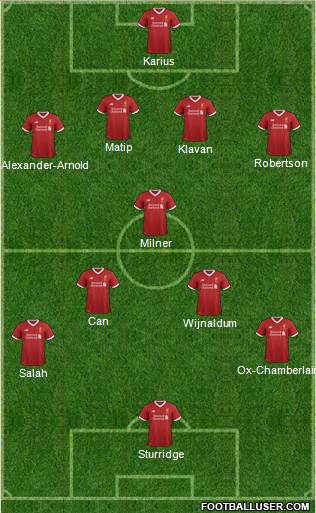