Liverpool take on West Ham at the London Stadium on Saturday evening. Here is the side I think Jurgen Klopp will select for the game:

Liverpool will be looking to close in on the top four with a positive result when they take on West Ham at the London Stadium on Saturday evening.

Goalkeeper: Loris Karius once again kept goal in the Champions League and managed to keep a clean sheet during the 3-0 win over Maribor, however, Simon Mignolet is expected to be recalled tomorrow.

Defence: Dejan Lovren is a major doubt with a thigh injury that he sustained during the pre-match warm up ahead of last weekend’s clash with Huddersfield.  Ragnar Klavan is therefore likely to continue alongside Joel Matip in the middle of defence.

Trent Alexander-Arnold came-in at right-back in midweek but I think we’ll see Joe Gomez recalled against West Ham while Alberto Moreno should keep his place at left-back.

Midfield: Jordan Henderson is expected to get a recall to the starting eleven after being named on the bench against Maribor and he should replace Gini Wijnaldum as the midfielder suffered an ankle injury on Wednesday night.

James Milner should keep his place in the middle of the park while Emre Can is also expected to be retained and he’ll be looking to build on a fine goal in midweek.

Adam Lallana is edging closer to making his long-awaited comeback from a thigh injury but he’s not due to return until after the international break.

Attack: Philippe Coutinho is not expected to be risked after missing the last two games with an adductor injury and he didn’t take part in full training with the rest of the squad yesterday.

Alex Oxlade-Chamberlain started against Maribor and showed flashes of his potential but I think we’ll see him drop back to the bench with Roberto Firmino moving out wide.

That would allow Daniel Sturridge to be recalled up front after he came off the bench to score during the 3-0 win over Maribor while Mohamed Salah is certain to keep his place in attack after another excellent display last time out.

Sadio Mane is back in full training after recovering from a hamstring injury but Klopp is unlikely to risk the winger from the start so he may not make his comeback until after the international break. 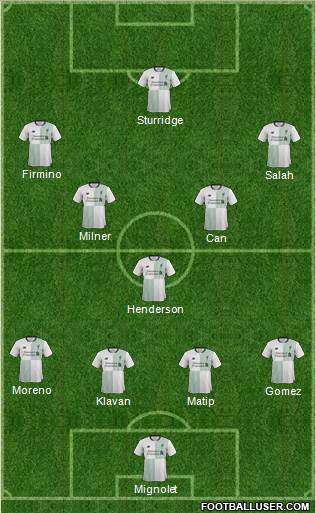