Arsenal take on Manchester City at the Etihad on Sunday afternoon. Here is the side Gooner Mac thinks Arsene Wenger will select for the game:

Arsenal will be hoping to climb in to the top four with a positive result when they take on Manchester City at the Etihad on Sunday afternoon.

Goalkeeper: The boss gave Matt Macey another start in midweek and the young keeper didn’t disappoint as he put in an excellent performance against Red Star Belgrade, however, Petr Cech is certain to get a recall tomorrow with David Ospina still out injured.

Defence: There will be wholesale changes to the defence with Laurent Koscielny, Per Mertesacker and Nacho Monreal all set for recalls after being rested in the Europa League.

Mathieu Debuchy will make way after making his third start of the season in midweek while Rob Holding and Mohamed Elneny are also expected to drop out.

Shkodran Mustafi is due to return from injury after the international break but for now he remains on the sidelines along with Calum Chambers – who’s still nursing a hip injury.

Midfield: Sead Kolasinac is back in training after shaking off a hip injury that he aggravated against Swansea last week so the Bosnian international is set to be recalled on the left.

Hector Bellerin should come back in on the right while Aaron Ramsey will renew his partnership alongside Granit Xhaka after the trio were also rested against Belgrade last time out.

Reiss Nelson and Ainsley Maitland-Niles will make way while Joe Willock will also drop out of the squad despite impressing in midweek. Francis Coquelin wasn’t at his best against Belgrade so he’ll do well to make the bench tomorrow.

Attack: There will be all-change in attack too as first team regulars Alexis Sanchez, Mesut Ozil and Alexandre Lacazette are expected to be recalled to the starting eleven after being given the night off on Thursday.

Olivier Giroud and Theo Walcott didn’t take their chances to shine in the Europa League as they put in disappointing performances. Jack Wilshere was one of our better performers on Thursday but he’s still expected to drop to the bench against City.

Danny Welbeck is still recovering from a groin injury but he’ll be hoping to make his comeback after the international break. 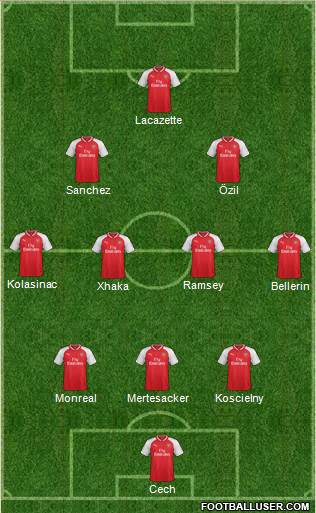