Arsenal have suffered a fresh injury concern ahead of the North London Derby against Spurs after Olivier Giroud picked up a knock in training with France. 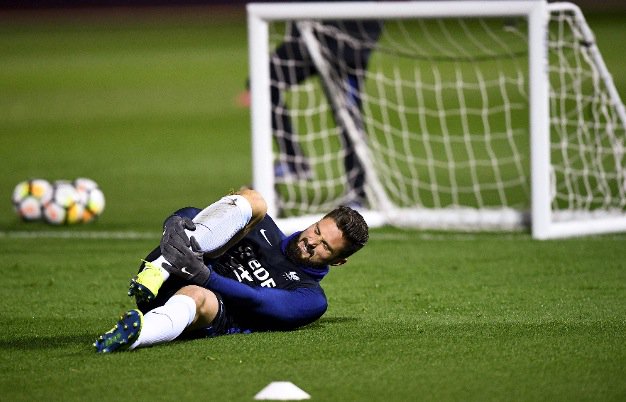 Arsenal have suffered a fresh injury concern ahead of the huge North London Derby against Tottenham after Olivier Giroud picked up a knock in training with France, according to the Mirror.

Giroud was called up to the latest French squad by Didier Deschamps despite not being a regular starter in Arsene Wenger’s first choice eleven this season.

The 31-year-old is yet to start a single Premier League game for the Gunners this campaign with all of his 6 starts so far coming in the Europa League and League Cup.

However, he’s still regarded as an important part of Wenger’s squad so it will have been a concern when Giroud went down clutching his right ankle during training at France’s Clairefontaine training base.

The Mirror claim Giroud was able to carry on the session after receiving treatment but it now a doubt for France’s friendly against Wales in Paris on Friday night.

Wenger will no doubt be keeping a close eye on things and speaking with the French medical team about Giroud’s condition as the Arsenal boss prepares his side to entertain rivals Tottenham in 11 days time.

Giroud is unlikely to start against Spurs if fit but the target-man is seen as a very useful weapon for Arsenal to have off the bench and the Frenchman has a good record against their rivals.

Therefore, Wenger will be praying his striker’s injury isn’t serious as the last thing the Arsenal boss needs is to lose another player ahead of what’s going to be a crucial game in their quest to finish in the top four this season.