Liverpool take on Southampton at Anfield on Saturday afternoon. Here is the side I think Jurgen Klopp will select for the game:

Liverpool will be looking to continue their push for the top four with a win when they take on Southampton at Anfield on Saturday afternoon.

Goalkeeper: Simon Mignolet has been Klopp’s regular in the Premier League this season so I don’t see that changing any time soon meaning Loris Karius will have to make-do with a place on the bench.

Defence: Dejan Lovren was only deemed fit enough to be on the bench for the win at West Ham before the international break after struggling with a thigh injury but he’s fully fit now so I think we might see him recalled this weekend.

Ragnar Klavan is the man expected to make way with Lovren resuming his partnership alongside Joel Matip in the middle of defence.

Joe Gomez excelled for England at centre-back against Brazil and fans have been calling for him to play in the middle for Liverpool but I think we’ll see the youngster continue at right-back ahead of Trent Alexander-Arnold.

Alberto Moreno has been one of the surprise packages for Liverpool this season so the Spaniard should keep his place at left-back.

Midfield: Jordan Henderson returned to full training yesterday after recovering from a thigh injury that kept him out of the win over West Ham so the skipper is expected to start in midfield.

Emre Can could keep his place in the middle of the park while Alex Oxlade-Chamberlain will also be hoping to retain his place after impressing against the Hammers. Gini Wijnaldum could be the man to miss out this weekend.

Adam Lallana is back in full training after finally recovering from a thigh injury that’s hampered him since pre-season so the midfielder could return to the bench against Newcastle.

Attack: Philippe Coutinho is back in contention after starting for Brazil against England in midweek having recovered from an adductor injury which kept him out before the international break.

Sadio Mane has been able to train despite aggravating a hamstring injury while away with Senegal but Klopp might not risk the attacker from the start this weekend.

Mohamed Salah is certain to start in attack and he’ll be looking to continue his sensational form while Roberto Firmino should once again lead the line up front.

That means Daniel Sturridge and Dominic Solanke will have to make do with places on the bench. 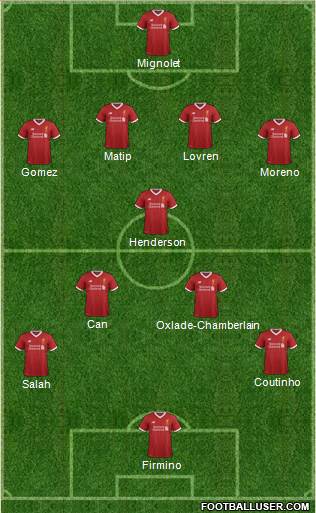