Expected Chelsea XI vs West Brom: Conte Forced In To A Change As Key Man Ruled Out

Chelsea take on West Brom at the Hawthorns on Saturday afternoon. Here is the side we think Antonio Conte will pick for the game:

Chelsea will be looking to build on their win over Man Utd before the international break when they take on West Brom at the Hawthorns on Saturday afternoon.

Goalkeeper: Thibaut Courtois is one of the first names on the team sheet so he’s certain to keep his place between the sticks with Willy Caballero once again named on the bench.

Defence: Conte has confirmed that David Luiz has a lot of work to do in order to force his way back in to his first team plans after being axed for the win over United two weeks ago.

The Brazilian international is also carrying a foot injury so Andreas Christensen is expected to continue at the back alongside Cesar Azpilicueta while Gary Cahill should recover from a knock to start in defence.

Midfield: Victor Moses is still working his way back to full fitness following a hamstring injury and he isn’t expected to be ready to start just yet so Davide Zappacosta could keep his place in the right wing-back position.

Marcos Alonso is expected to once again line-up on the left while N’Golo Kante and Cesc Fabregas should retain their places in the middle of the park.

However, Chelsea have received a blow ahead of the game after Tiemoue Bakayoko pulled up in training this morning so Danny Drinkwater could be in-line for a recall in midfield.

Attack: Chelsea will make a late check on the fitness of Eden Hazard after he picked up a knock while on international duty with Belgian this week but the attacker is expected to be passed fit.

Hazard is therefore set to support Alvaro Morata once again with the Spanish international leading the line up front and he’ll be looking to build on his superb match-winning goal against United.

Willian and Pedro will offer Conte some top class options from the bench, however, Michy Batshuayi could miss out after withdrawing from the Belgian squad with a foot injury. 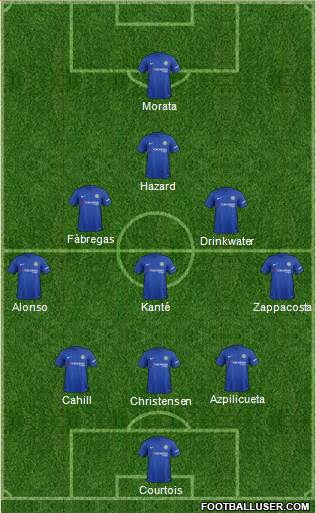