Liverpool take on Sevilla in the Champions League tomorrow night. Here is the side I think Jurgen Klopp will select for the game:

Liverpool will be looking to book their place in the knockout stages of the Champions League when they take on Sevilla tomorrow night.

Goalkeeper: Klopp has played Loris Karius in the Champions League so far this season and the Reds boss has confirmed the German youngster will once again replace Simon Mignolet tomorrow night.

Defence: Joel Matip hasn’t travelled to Spain as he’s been left in Merseyside to recover from a knock that kept him out of the win over Southampton at the weekend.

Therefore, Dejan Lovren is expected to continue alongside Ragnar Klavan in the middle of defence with Alberto Moreno once again starting on the left.

Joe Gomez was left out against Southampton on Saturday so I expect we’ll see him recalled at right-back with Trent Alexander-Arnold dropping to the bench.

Midfield: Jordan Henderson could get a breather tomorrow night after recently recovering from a thigh injury so Emre Can could come back in to the side after being a substitute at the weekend.

James Milner is also pushing for a recall and he could replace Gini Wijnaldum if Klopp decides to freshen things up but I expect Philippe Coutinho will keep his place after another impressing show on Saturday.

Adam Lallana travelled to Spain so could be named in the squad for the first time this season after recovering from a thigh injury but I think he’ll be named on the bench alongside the likes of Alex Oxlade-Chamberlain.

Attack: Klopp has options if he wants to shake things up in attack ahead of the Chelsea game with Daniel Sturridge and Dominic Solanke pushing for game-time.

However, the Reds need a positive result to maintain their push for the knockout stages so Klopp may not want to take any chances against a dangerous Sevilla outfit.

Therefore, we could see the devastating trio of Sadio Mane, Roberto Firmino and Mohamed Salah deployed in attack once again. 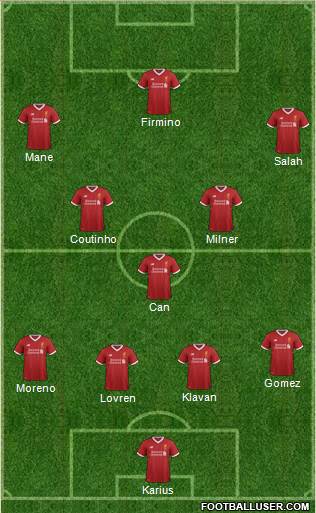