Chelsea take on Qarabag in the Champions League this evening. Here is our preview including team news, line-up and prediction

Chelsea will be looking to book their place in the knockout stages of the Champions League when they take on Qarabag tonight.

The Blues warmed up for the game with a comprehensive 4-0 victory over West Bromwich Albion at the weekend but the focus will be firmly on European matters this evening.

Chelsea currently sit second in Group C on seven points following the 3-0 thrashing by Roma earlier this month so Antonio Conte will be desperate to get their qualification campaign back on track.

The good news is Atletico Madrid have endured a disappointing season with the Spaniard’s only managing to take three points from their four games so Chelsea know victory tonight will secure safe passage to the last-16.

The west Londoners should be confident of doing so as they won the reverse fixture 6-0 at Stamford Bridge in September and Qarabag sit bottom of the group on just two points.

Chelsea have no fresh injury concerns to worry about but Conte may decide to rotate his squad with Saturday’s huge trip to Liverpool in mind.

David Luiz and Antonio Rudiger are pushing for recalls in defence while Danny Drinkwater could come in to the midfield alongside N’Golo Kante with Cesc Fabregas and Tiemoue Bakayoko rested.

However, Michy Batshuayi has once again been ruled out with an ankle injury while Victor Moses is also still working his way back from a hamstring problem. Charly Musonda and Kenedy didn’t make the trip due to knocks.

Qarabag will be without winger Pedro Enrique through suspension following his sending off against Atletico Madrid while Dani Quintana and Badavi Huseynov are also injury doubts. 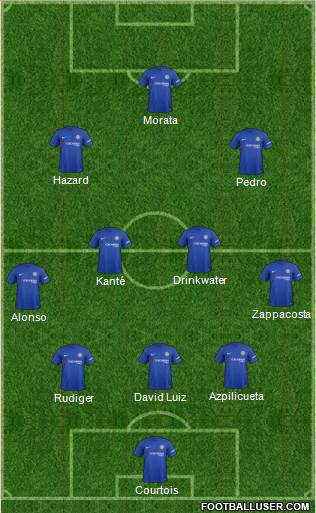 Qarabag 1-2 Chelsea: The Blues will have been hugely disappointed with the defeat in Rome but they’ve responded in the perfect fashion with victories over Man Utd and West Brom. I do think this will be a tricky game, especially if Conte freshen-up his team, but feel Chelsea will still have too much for Qarabag to handle.