Liverpool will need to get over their Champions League capitulation quickly as they take on Chelsea on Saturday. Here is the side I think Klopp will select

Liverpool will need to get over their Champions League capitulation quickly as they take on Chelsea at Anfield on Saturday evening.

The Reds blew a three-goal lead to draw 3-3 with the Spaniard’s on Tuesday night but they still go in to the weekend action as the 11/10 favourites to beat Chelsea which I think is excellent value.

Goalkeeper: Loris Karius once again kept goal in the Champions League on Tuesday night but the German is set to make way with Simon Mignolet expected to be recalled between the sticks.

Defence: Joel Matip has missed the last two games due to a thigh strain but Klopp said it’s a minor issue so I suspect the centre-back will be available to return against Chelsea this weekend.

Ragnar Klavan is the man most likely to make way if Matip is passed fit as Klopp seems reluctant to drop Dejan Lovren for any significant period of time.

Alberto Moreno has come under fire following his horror show against Sevilla but I think we’ll still see Klopp stick by him as the Spaniard has actually been impressive for much of the season.

Nathaniel Clyne continues to recover from back surgery and I think Joe Gomez should keep his place at right-back ahead of Trent Alexander-Arnold.

Midfield: Jordan Henderson is another player who’s been criticised for his part in the 3-3 draw with Sevilla but again I think Klopp will stay loyal to his skipper against Chelsea.

Emre Can could be in for a recall after being named on the bench for the last two games with Gini Wijnaldum favourite to make way as Philippe Coutinho is certain to keep his place in the side.

Adam Lallana travelled to Spain in midweek after recovering from a thigh injury but wasn’t named in the squad so Klopp may have been holding him back for this weekend.

However, a place on the bench is the best Lallana can hope for after so long on the sidelines so I expect he’ll be among the substitutes along with Alex Oxlade-Chamberlain – who continues to struggle for regular game-time.

Attack: Attack wasn’t Liverpool’s problem against Sevilla as they raced in to a 3-0 half-time lead thanks to some wonderful football from their front three.

Roberto Firmino was in fine form after scoring twice, Sadio Mane was also on target while Mohamed Salah was a constant threat to the La Liga outfit.

Daniel Sturridge will no doubt be hoping for a recall against his former side but I think Klopp will stick with his preferred front three of Salah, Mane and Firmino this weekend.

The trio are in devastating form and you can get odds of 9/2 on Salah to score the first goal on Saturday, which should be a tempting bet for any Liverpool fan. 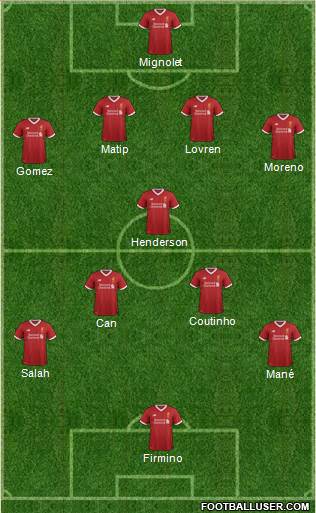