Chelsea will be hoping to continue their push for the top two when they take on Liverpool at Anfield on Saturday evening. Here is our predicted line-up

Chelsea will be hoping to continue their push for the top two when they take on Liverpool at Anfield on Saturday evening.

The Blues head in to the game sitting third in the table and three points above Liverpool so fans could be tempted to back Chelsea at 5-2 to win at Anfield this weekend.

Goalkeeper: Thibaut Courtois will be one of the first names on the team sheet so the Belgian is once again expected to start between the sticks with Willy Caballero having to make-do with a place on the bench.

Defence: David Luiz was back in the starting eleven against Qarabag in midweek but I think we could see the Brazilian international dropping back to the bench with Andreas Christensen recalled against Liverpool.

Gary Cahill should also come back in to the side after being rested in midweek while Cesar Azpilicueta is expected to keep his place in the back three with Antonio Rudiger making way.

Midfield: Victor Moses will be checked ahead of the game to see if he’s ready to return from a hamstring injury that’s kept him out for over a month. If he’s still not passed fit then Davide Zappacosta should keep his place in the right wing-back position.

Marcos Alonso is expected to once again line-up on the left while Conte may decide to make a slight switch in formation to get another body in midfield in order to deal with Liverpool’s attacking threat.

That should see Tiemoue Bakayoko recalled to the starting eleven with the Frenchman playing in a midfield three alongside Cesc Fabrega and N’Golo Kante.

Attack: The formation change means Pedro is expected to make way while Willian could also drop out despite scoring two superb goals against Qarabag in midweek.

Eden Hazard is certain to keep his place after another impressive display in the Champions League and he’ll support Alvaro Morata as the Spaniard should be recalled after being rested last time out.

Michy Batshuayi and Charly Musonda missed the trip to Qarabag through injury so they’ll need to be assessed in training ahead of the Liverpool game.

Hazard was on the scoresheet again in midweek and Chelsea fans could be tempted to back the attacker to open the scoring at odds of 15/2 this weekend. 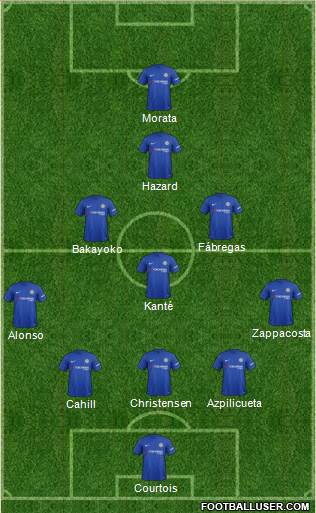