Players from Arsenal, Chelsea and Liverpool have been named in the WhoScored? Premier League Team of the Week. Check out the side here

Players from Arsenal, Chelsea and Liverpool have been named in the WhoScored? Premier League Team of the Week.

Arsenal moved up to fourth in the table with a hard fought 1-0 victory over Burnley on Sunday afternoon and while Alexis Sanchez was the match-winner, it’s Shkodran Mustafi who’s made it in to the TOTW.

The German international has been in great form since returning from injury earlier this month and he put in another top class display at Turf Moor to earn a score of 8.1.

Liverpool saw their top four hopes dented after conceding a late equaliser to Chelsea at Anfield on Saturday night but young Joe Gomez impressed at right-back and he’s made it in to the team after registering a score of 7.5.

Willian came off the bench to score a superb. albeit fortunate, equaliser for Chelsea but it’s fellow attacker Eden Hazard who’s named in the TOTW with another excellent performance earning him a score of 9.1 at Anfield.

Manchester City maintained their lead at the top of the table thanks largely to Raheem Sterling’s winner over Huddersfield and the young attacker makes the cut thanks to his score of 8.0 while two Watford midfielders are named in the team following their superb win at Newcastle.

Southampton dominate the team ad Dustan Tadic, Ryan Bertrand and Charlie Austin are all make the line-up after helping the South Coast club to a 4-1 victory over Everton yesterday.

Here is the full line-up: 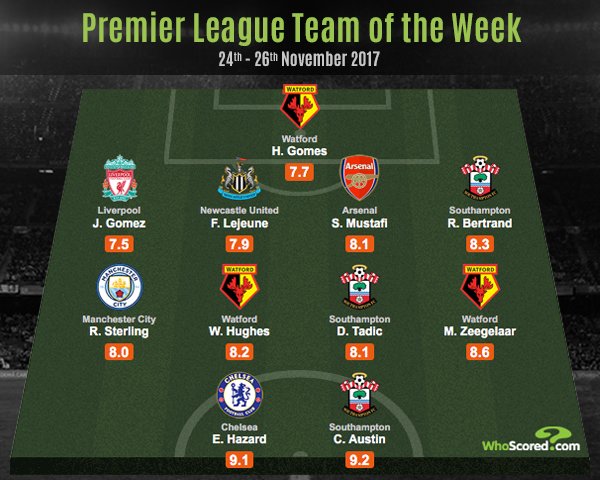