Liverpool take on Stoke City at the Bet365 Stadium on Wednesday night. Here is the side I think Jurgen Klopp will select for the game:

Liverpool will look to keep the pressure on the top four with a win when they take on Stoke City at the Bet365 Stadium on Wednesday night.

Goalkeeper: Simon Mignolet couldn’t be faulted for Chelsea’s late equaliser at the weekend so there is no reason to think Klopp will change his keeper tomorrow. Therefore, the Belgian international should keep his place with Loris Karius once again on the bench.

Defence: Dejan Lovren remains a doubt due to a back injury that kept him out of the draw with Chelsea so Ragnar Klavan could continue alongside Joel Matip in the middle of defence tomorrow.

However, we could see Klopp freshen things up in the full-back positions with Andrew Robertson pushing for a rare start meaning Alberto Moreno could be given a breather.

Nathaniel Clyne continues to miss out with a back injury but Trent Alexander-Arnold may come in for Joe Gomez at right-back.

Midfield: Liverpool may also make some changes in midfield with Emre Can passed fit to return following a minor muscle injury and he could replace Jordan Henderson in the holding role.

Gini Wijnaldum is also pushing for a recall so the Dutch international could replace James Milner with Philippe Coutinho keeping his place in the side.

Adam Lallana made his first appearance of the season with a late cameo against Chelsea so he’ll be looking to get some more minutes under his belt tomorrow night.

Attack: Klopp sprung a surprise at the weekend by resting Roberto Firmino and Sadio Mane against Chelsea but the Reds boss has hinted the pair will be recalled against Stoke.

That should see Alex Oxlade-Chamberlain and Daniel Sturridge make way as Mohamed Salah is almost certain to keep his place after continuing his fine goal-scoring form at the weekend. 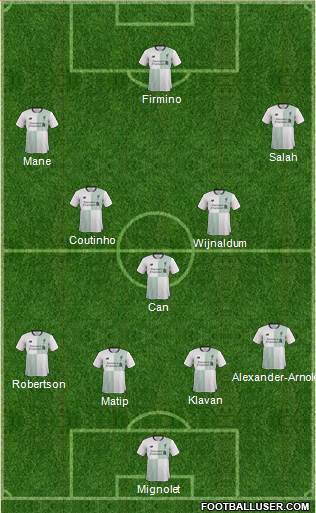