Chelsea take on Swansea City at Stamford Bridge on Wednesday night. Here is the side we think Antonio Conte will pick for the game:

Chelsea will be looking to keep the pressure on the top two when they take on Swansea City at Stamford Bridge on Wednesday night.

Goalkeeper: The Blues boss heaped more praise on Thibaut Courtois today so there is no chance the Belgian international will be dropped any time soon. Therefore, Willy Caballero will have to make-do with a place on the bench once again.

Defence: Conte confirmed an injury blow earlier after revealing that David Luiz has been ruled out with a knee problem so he’s set for a spell on the sidelines.

Gary Cahill could be given a breather with Antonio Rudiger getting a recall alongside Andreas Christensen with the impressive youngster likely to keep his place in the middle of defence.

Cesar Azpilicueta is also expected to retain his place on the right side of the back three with Cahill offering an option from the bench.

Midfield: Victor Moses is back in contention after recovering from a hamstring injury so the Nigerian international could replace Davide Zappacosta in the right wing-back position.

Marcos Alonso will continue on the left but we could see Cesc Fabregas being recalled in the middle of the park after being named as a substitute against Liverpool at the weekend.

Tiemoue Bakayoko could drop out following a disappointing display at Anfield while Danny Drinkwater may also make way if Conte tinkers with his formation but N’Golo Kante should keep his place in midfield.

Attack: The formation change means Conte can play another attacker and Willian is favourite to come in ahead of Pedro as the Brazilian international scored a brace against Qarabag last week and came off the bench to score a superb equaliser at Liverpool on Saturday.

Eden Hazard is almost certain to keep his place after another impressive outing at Anfield while Alvaro Morata should once again lead the line up front.

Conte will have few attacking options on the bench as Michy Batshuayi has once again been ruled out while Charly Musonda is also still sidelined. 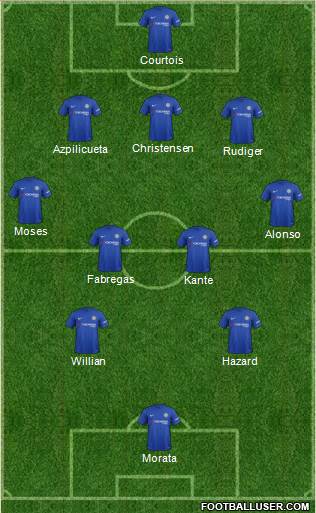