Liverpool take on Brighton at the Amex Stadium on Saturday afternoon. Here is the side I think Jurgen Klopp will select for the game:

Goalkeeper: Simon Mignolet was extremely fortunate not to be sent off during the win over Stoke last night and the result could have been different had the referee brandished the red card. However, I still think Klopp will stick by the Belgian international.

Defence: Dejan Lovren made a successful return to the starting eleven in midweek after recovering from a back injury so I expect he’ll continue alongside Joel Matip this weekend.

Klopp resisted the temptation to freshen things up in the full-back areas against Stoke but if he decides to do-so on Saturday then Andrew Robertson and Trent Alexander-Arnold are pushing for recalls.

However, I have a feeling the Reds boss will want to build on the clean sheet from last night so expect Alberto Moreno and Joe Gomez to keep their places.

Midfield: Jordan Henderson is poised to be recalled after being rested last night so Emre Can could make way as I expect Gini Wijnaldum to keep his place in midfield.

Philippe Coutinho is also set for a recall after being named among the substitutes last time out with Alex Oxlade-Chamberlain the man expected to make way.

Adam Lallana wasn’t involved in the squad on Wednesday due to a minor muscle problem so he could return to the bench this weekend.

Attack: Klopp has rotated his attackers over the past few games so he may continue that trend on Saturday with Daniel Sturridge pushing for a recall up front.

That would see Roberto Firmino make way while Dominic Solanke should also drop out after making a rare start at Stoke but Sadio Mane could be retained after getting himself on the score-sheet.

Mohamed Salah made a huge impact off the bench against Stoke having scored two excellent goals so the Egyptian international will be looking to continue his superb form on Saturday. 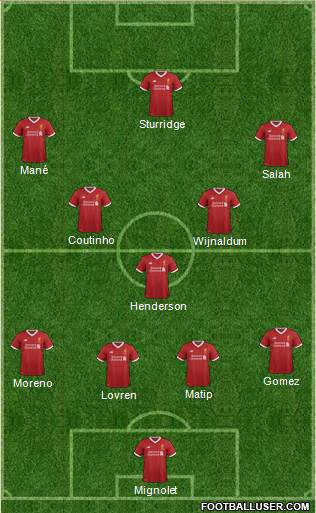