Arsenal take on Manchester United at the Emirates on Saturday evening. Here is the side Gooner Mac thinks Arsene Wenger will select for the game:

Arsenal will be desperate to cement their position in the top four with a win when they take on Manchester United at the Emirates on Saturday evening.

Goalkeeper: Petr Cech has been in solid form of late to help keep consecutive clean sheets so there is no reason for Wenger to change his keepers this weekend.

Defence: The back three is also looking settled right now with Shkodran Mustafi producing some excellent performances in the middle of defence since returning from injury.

With Laurent Koscielny thriving on the right of the three and Nacho Monreal also putting in consistent displays the defence looks very balanced right now so no doubt Wenger will stick with his preferred trio against United.

Midfield: Wednesday night’s 5-0 thrashing of Huddersfield was a stroll in the second half so I don’t think the boss will need to make any unnecessary changes as the players should still be fresh.

Aaron Ramsey was excellent against Huddersfield as he helped himself to two top class assists for the Lacazette and Ozil goals so the Welshman will be looking to continue his fine form tomorrow.

Granit Xhaka will also keep his place in the holding role while Sead Kolasinac should once again start in the left wing-back position. Hector Bellerin didn’t have his crossing boots on against Huddersfield but the Spaniard will still retain his position on the right.

Attack: Unfortunately, Alexandre Lacazette looks set to miss out after suffering a groin injury in midweek. The Frenchman was forced off at half-time after scoring the opening goal and Wenger confirmed after the game the 26-year-old wouldn’t be fit to face United.

Olivier Giroud replaced Lacazette against Huddersfield but I think we might see Danny Welbeck come in against his former club as he is more of a like-for-like replacement than Giroud.

Mesut Ozil was in sublime form on Wednesday night so Wenger will be hoping the German international puts in another top class performance this weekend as he’s unplayable when he’s on form.

Alexis Sanchez is a minor doubt after being forced off with a hamstring complaint in midweek but the boss is confident he’ll recover in time to take on United.

If the Chilean international is ruled out it would be a huge blow and it would probably see Welbeck play in attack alongside Ozil with Giroud leading the line up front. 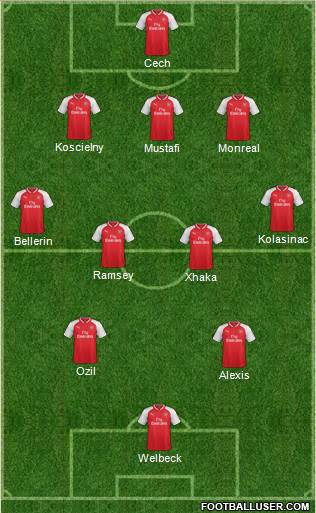