Chelsea take on West Ham at the London Stadium on Saturday. Here is the side we think Antonio Conte will pick for the game:

Chelsea will look to keep the pressure on the top two in the Premier League with a win when they take on West Ham at the London Stadium on Saturday.

Goalkeeper: Thibaut Courtois is one of the first names on the team sheet so no doubt the Belgian international will retain his place between the sticks this weekend.

Defence: David Luiz is once again expected to miss out as the Brazilian international is nursing a knee injury so Andreas Christensen should continue in the middle of the back three after impressing in recent weeks.

Gary Cahill was recalled for the Champions League draw with Atletico Madrid in midweek but he could make way for Antonio Rudiger as Conte seems to be rotating them of late.

However, Spanish international Cesar Azpilicueta should keep his place on the right side of the back three.

Midfield: Victor Moses has made a successful return from injury so he should keep his place in the right wing-back role. Marcos Alonso was rested last time out so he’s expected to get a recall with Davide Zappacosta dropping out.

N’Golo Kante should start in the holding role with Cesc Fabregas also keeping his place but Danny Drinkwater could come in for Tiemoue Bakayoko after the Frenchman struggled against Madrid last time out.

Attack: If Conte plays with a five-man midfield then it means he’ll only play one off the striker so the likes of Willian and Pedro may have to make-do with places on the bench.

That’s because Eden Hazard is almost certain to keep his place as he’s arguably Chelsea’s best player and Conte is unlikely to leave him out for this tricky away game.

Alvaro Morata was among the goals again last weekend so the Spanish international will be hoping to find the net again as he’s expected to lead the line up front with Michy Batshuayi among the substitutes. 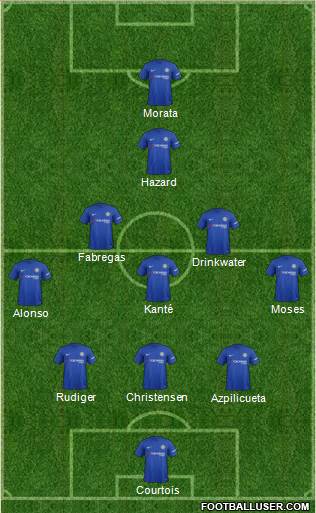