Liverpool entertain West Bromwich Albion at Anfield on Wednesday night. Here is the side I think Jurgen Klopp will select for the game:

Liverpool will look to get back to winning ways when they entertain West Bromwich Albion at Anfield on Wednesday night.

Goalkeeper: Simon Mignolet returned in goal for the Merseyside derby at the weekend after being left out of the Champions League clash but I expect the Belgian international to retain his place tomorrow.

Defence: Alberto Moreno is facing a spell on the sidelines after suffering an ankle injury against Spartak Moscow and Andrew Robertson was given a start at the weekend.

Klopp may be tempted to move James Milner out to left-back against an experienced and physical West Brom side but I think he’ll stick with young Robertson after a solid show against Everton.

Joel Matip is back in light training after a thigh injury but isn’t expected to be fit to start so Ragnar Klavan should continue in defence against West Brom.

Dejan Lovren was up to his old tricks after giving away a penalty against Everton but he’s still expected to keep his place while Joe Gomez should once again start at right-back.

Midfield: We should see changes in midfield as Klopp’s expected to freshen things up with Gini Wijnaldum and Emre Can both pushing for recalls in the middle of the park.

Jordan Henderson could retain his place but Alex Oxlade-Chamberlain is set to make way as I think we’ll see Philippe Coutinho recalled after being named on the bench on Sunday.

Attack: Klopp is also expected to make a change in attack with Roberto Firmino in-line for a recall after being benched against Everton meaning Dominic Solanke should drop out.

Mohamed Salah continued his sensational form this season with another wonder strike at the weekend so it would take a brave manager to leave him out right now while Sadio Mane should also keep his place in attack.

Adam Lallana is back in training after recovering from a knock but Klopp has suggested he may not risk him against West Brom so the midfielder may be given more time to build his fitness. 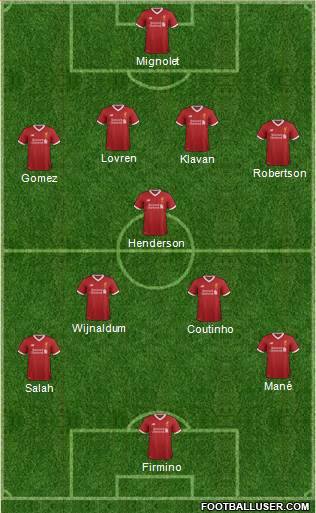