Players from Tottenham, Chelsea, Manchester United and Manchester City have all made it in to the latest WhoScored Premier League Team of the Week.

Players from Tottenham, Chelsea, Manchester United and Manchester City have all made it in to the latest WhoScored Premier League Team of the Week.

United beat Bournemouth 1-0 at Old Trafford last night thanks to a solitary goal from Belgian international striker Romelu Lukaku midway through the first half.

However, they had David De Gea to thank for the three points as he pulled off a number of saves to keep the visitors at bay and the Spaniard has made it in to the TOTW thanks to a score of 7.9.

City maintained their 11-point advantage at the top of the table with a 4-0 win at Swansea with summer signing Bernado Silva helping himself to a brace so unsurprisingly he’s been named in the TOTW.

Silva is joined by namesake David after the Spaniard also got on the score-sheet to secure a score of 9.3 while Sergio Aguero is the third City player to make the cut thanks to his score of 8.9.

Spurs climbed back in to the top four with a 2-0 victory over Brighton and right-back Serge Aurier has made the TOTW after scoring a fortuitous goal that saw his cross fly in to the far top corner.

Chelsea cemented their position in the top four with a 3-1 victory over Huddersfield on Tuesday night and Willian was the inspiration as he scored one and set up the other two so understandably his score of 9.0 is enough to see him named in the team of the week.

Check out the full eleven here: 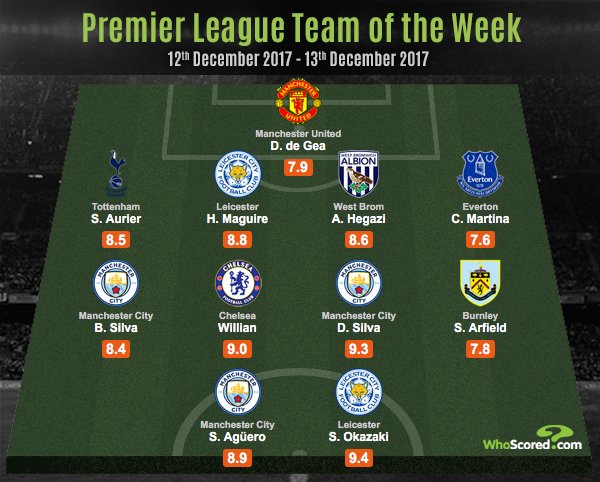