Liverpool will be looking to get back to winning ways when they take on Bournemouth at Dean Court. Here is the side I think Jurgen Klopp will select

Liverpool will be looking to get back to winning ways when they take on Bournemouth at Dean Court on Sunday afternoon.

Goalkeeper: Simon Mignolet was rested for the stalemate with West Brom in midweek due to a minor knock but Klopp has confirmed the Belgian international will return this weekend so Loris Karius will make way.

Defence: Joe Gomez had a minor ankle problem on Wednesday night but he’s expected to be fit to return at right-back on Sunday with Trent Alexander-Arnold dropping out.

Alberto Moreno is once again out as he’s facing a spell on the sidelines with an ankle injury and Andrew Robertson is nursing a knock so James Milner could be called-in at left-back if the Scottish international isn’t 100% fit.

Joel Matip is back in light training after recovering from a thigh injury but he won’t be available just yet so Ragnar Klavan will continue alongside Dejan Lovren this weekend.

Midfield: Jordan Henderson was left on the bench in midweek so the skipper is set to get a recall in the middle of the park and Gini Wijnaldum could be the man to make way.

Emre Can may keep his place in midfield while Philippe Coutinho should also be retained. Adam Lallana has been passed fit to return to the squad after overcoming a muscle problem but he’s expected to start from the bench.

Attack: Klopp has been rotating his attackers in recent games but with no midweek fixture to contend with the Liverpool boss may opt to stick with his best line-up meaning the ‘fab four’ could once again start despite drawing a blank in midweek.

Mohamed Salah has been in sensational form so I expect he’ll retain his place while Roberto Firmino should also start up front as Daniel Sturridge is facing a late fitness test on a hamstring problem.

Sadio Mane could be the most likely to be rested if Klopp decides to mix things up with Alex Oxlade-Chamberlain pushing for a recall but I think we’ll see the same front line as in midweek. 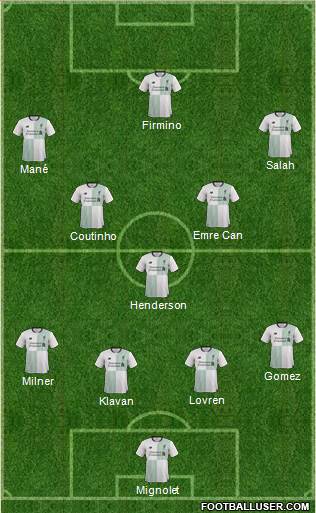