Manchester United take on West Brom at the Hawthorns on Sunday afternoon. Here is the team I think Jose Mourinho will pick for the game:

Manchester United will be desperate for a win to close the gap on Manchester City when they take on West Brom at the Hawthorns on Sunday afternoon.

Goalkeeper: David De Gea was excellent once again during the 1-0 win over Bournemouth in midweek so the Spaniard is certain to keep his place between the sticks this weekend.

Defence: United reverted to a back four on Wednesday night having gone with a back three in previous games but I think Mourinho will be tempted to field three centre-backs against a physical West Brom team.

Phil Jones made a success return to the starting eleven in midweek so he should keep his place along with Chris Smalling but Marcos Rojo remains a doubt after suffering a nasty cut to his head last weekend so Victor Lindelof could be the man to come in.

Midfield: Luke Shaw impressed against Bournemouth and is more than capable of playing in the left wing-back position but I think Ashley Young will be recalled this weekend with Antonio Valencia once again on the right.

Paul Pogba serves the final game of his three-match suspension but Nemanja Matic is certain to keep his place in the middle of the park and his presence will be vital for the visitors.

Scott McTominay was handed a rare start in midweek but I don’t see Mourinho keeping him in the side at West Brom so Ander Herrera is expected to get a recall on Sunday.

Marouane Fellaini would be a very useful player to have available this weekend but it looks like the Belgian international is still recovering from a knee injury.

Attack: Romelu Lukaku ended his goal drought on Wednesday night and I expect him to once again lead the line up front with Zlatan Ibrahimovic offering support from the bench.

Juan Mata and Jesse Lingard could make way with Marcus Rashford recalled to join Anthony Martial in attack after being named as a substittue in midweek.

Henrikh Mkhitaryan continues to be out-of-favour so it remains to be seen whether the Armenian international will force his way back in to the squad on Sunday. 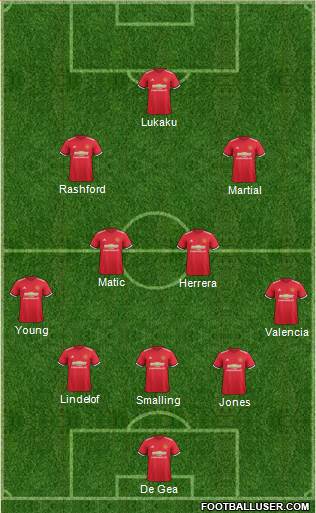