The draw for the semi finals of the Carabao Cup was conducted tonight and Chelsea will take on Arsenal while Man City got Bristol City.

The draw for the semi finals of the Carabao Cup was conducted tonight and we’ve got some exciting games to look forward to next month.

Bristol City secured a historic 2-1 victory over Manchester United this evening and they’ve been rewarded with a bumper tie against Premier League leaders Manchester City.

Pep Guardiola’s side needed penalties to edge past Leicester City after drawing 1-1 at the King Power on Tuesday night and they’ll host Bristol in the first leg at the Etihad Stadium.

Arsenal booked their place in the last four after beating West Ham 1-0 at the Emirates last night and they’ll now face a London derby against Chelsea in the semi’s.

The Blues scored a late winner to beat Bournemouth 2-1 at Stamford Bridge this evening and Antonio Conte’s side will now entertain Arsenal in the first leg before heading to the Emirates for the return leg.

The first leg’s will be played on the 8th January with the second leg’s on the 22nd January. 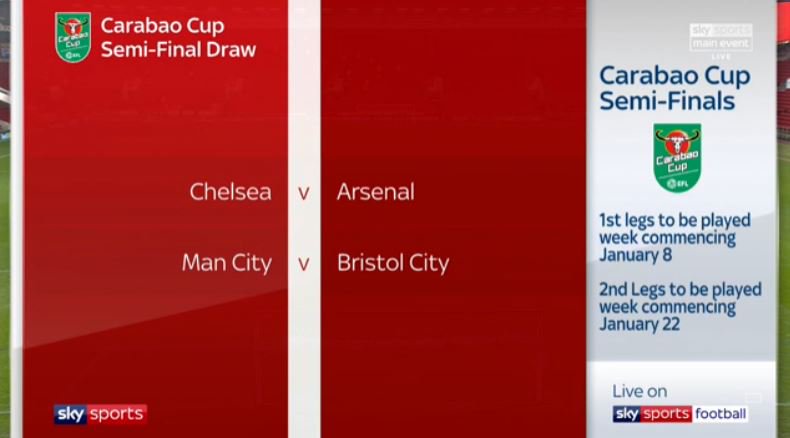