Manchester United take on Leicester City at the King Power on Saturday night. Here is the team I think Jose Mourinho will pick for the game:

Manchester United will look to bounce back from their shock League Cup defeat when they take on Leicester City at the King Power on Saturday night.

Goalkeeper: David De Gea was rested for the Carabao Cup defeat last night so the Spanish international is set to return between the sticks on Saturday with Sergio Romero dropping out.

Defence: It will be all change at the back too as a number of first team players were given a breather in the League Cup so the likes of Victor Lindelof, Marcos Rojo and Daley Blind will make way.

Matteo Darmian had a nightmare against Bristol so Antonio Valencia will come in at right-back as long as he recovers from a minor hamstring problem that he picked up against West Brom last weekend.

Luke Shaw also failed to take his opportunity to hold down a regular spot so Ashley Young should be recalled at left-back while Phil Jones and Chris Smalling are expected to start in the middle of the back four.

Midfield: Paul Pogba returned from his suspension last night and the French international should retain his place in midfield but he may play in a slightly more advanced role this weekend.

Scott McTominay will make way as Nemanja Matic returns after being rested against Bristol and we could see Ander Herrera come in alongside the Serbian international.

Marouane Fellaini has been nursing a knee injury in recent weeks so it remains to be seen whether he’ll recover in time to make the squad.

Attack: Romelu Lukaku scored in each of his last two Premier League games before being rested last night. Zlatan Ibrahimovic scored a nice free-kick on his first start of the season but the Swedish legend is expected to make way with Lukaku returning up top.

Jesse Lingard should be recalled in attack after being rested against Bristol and one of Marcus Rashford and Anthony Martial should join the England international in supporting Lukaku.

Juan Mata is also an option for Mourinho but Henrikh Mkhitaryan is expected to once again be dropped from the squad after making a 20 minute cameo appearance off the bench last night. 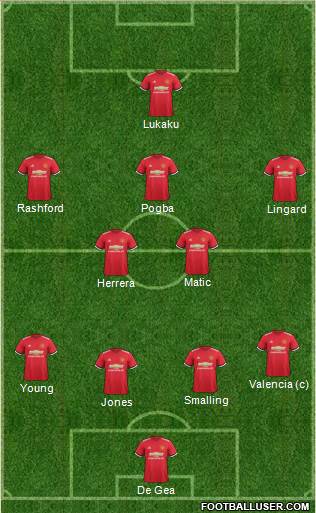