Arsenal take on Liverpool at the Emirates on Friday night. Here is the side Gooner Mac thinks Arsene Wenger will select for the game:

Arsenal have the chance to climb in to the top four of the Premier League when they take on Liverpool at the Emirates on Friday night.

Goalkeeper: Petr Cech is expected to come back in to the starting eleven after being rested for the Carabao Cup win over West Ham.

Defence: Wenger has deployed a back four in recent weeks but with Shkodran Mustafi in contention after recovering from a thigh injury I think we might see him reverting to a back three.

The German international was playing well in the middle of a three before his injury so I think we’ll see him starting alongside Laurent Koscielny and Nacho Monreal against Liverpool after they were rested in midweek.

Midfield: Ainsley Maitland-Niles has started at left-back in our last two league games and Wenger has hinted he’s ready to play the youngster against Liverpool’s dangerous attack after leaving him out of the League Cup squad.

It means Sead Kolasinac will make way while Hector Bellerin is expected to be recalled on the right with Mathieu Debuchy also dropping out.

Aaron Ramsey has been ruled out with a hamstring injury so Jack Wilshere should start in the middle of midfield alongside Granit Xhaka with Francis Coquelin and Mohamed Elneny dropping out.

Attack: It will be all-change in attack with Theo Walcott and Danny Welbeck making way while Olivier Giroud has been ruled out after picking up a hamstring injury against West Ham.

Alexis Sanchez hasn’t been playing well in recent weeks but I think Wenger will persevere with the Chilean international in attack while Mesut Ozil should also come back in to the side after being rested on Tuesday.

With Giroud out it means Alexandre Lacazette is expected to start up front with Welbeck offering an option from the bench along with the likes of Alex Iwobi and Walcott. 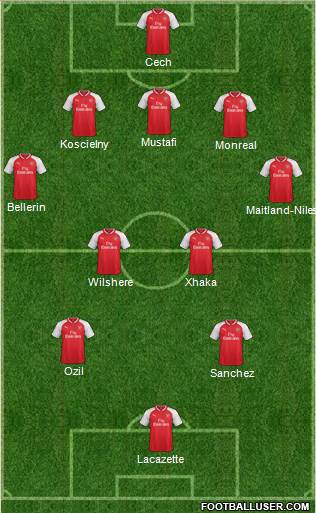