Tottenham will look to climb in to the top four when they take on Southampton at Wembley on Boxing Day. Here is the side we think Pochettino will select

Tottenham will look to climb in to the top four with a win when they take on Southampton at Wembley on Boxing Day.

Goalkeeper: Hugo Lloris will once again lead Tottenham out with Michel Vorm offering support from the bench.

Defence: Pochettino is expected to rotate his full-backs once again with Kieran Trippier coming in for Serge Aurier at right back while Danny Rose should be recalled for Ben Davies at left back.

Toby Alderweireld remains out with a long-term hamstring injury so we should see Spurs continue with a back four with the ever-impressive Davinson Sanchez once again alongside Jan Vertonghen in the middle of defence.

Midfield: Victor Wanyama could be back in the squad after returning to training recently following a long-term knee injury but a place on the bench is the best he can probably hope for as he’s lacking match practice.

Harry Winks missed the win at Burnley with a ankle injury and it remains to be seen whether he’ll recover in time to face Southampton so Eric Dier should continue in midfield on Tuesday afternoon.

Moussa Sissoko put in a decent display in the middle of the park last time out but I think we might see Mousa Dembele recalled to the starting eleven against the Saints.

Attack: Erik Lamela is pushing for a recall but I think Pochettino might continue to ease the Argentinean international back in to action from the subs bench.

Therefore, Hueng-min Son could continue in attack along with Christian Eriksen. Dele Alli was perhaps fortunate to escape a red card at Burnley last night but the England international should keep his place against Southampton.

Harry Kane continued his sensational form with another hat-trick last time out so Pochettino would be a brave man to leave him out, even if he could do with a rest. Therefore, expect Kane to lead the line up front with Fernando Llorente offering an option from the bench if needed. 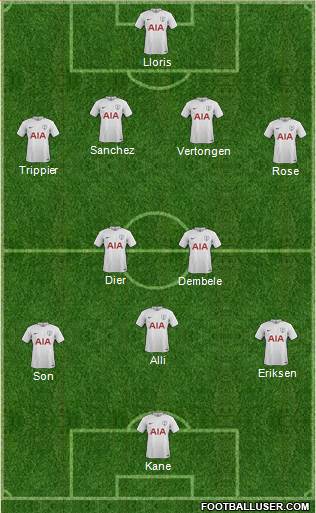