Manchester United take on Southampton at Old Trafford on Saturday afternoon. Here is the team I think Jose Mourinho will pick for the game:

Manchester United will look to get back to winning ways when they take on Southampton at Old Trafford on Saturday afternoon.

Goalkeeper: David De Gea has conceded four goals in his last two games but the Spaniard will still be one of the first names on the team sheet.

Defence: United are expected to once again be without Chris Smalling as the centre-back missed the 2-2 draw with Burnley due to a groin problem that he suffered against Leicester City.

Antonio Valencia is also still missing with a hamstring injury so Ashley Young could keep his place at right-back – although Matteo Darmian could be an option as he returned to training today following a minor knock.

Marcos Rojo is available for selection so he should keep his place alongside Phil Jones in the middle of defence while Luke Shaw could retain his place at left-back after putting in a solid shift last time out.

Midfield: Mourinho is under pressure to get a result this weekend after two disappointing draws but I don’t see him making any changes in midfield.

Paul Pogba has struggled to get back to his best since recovering from a hamstring injury but the French international should once again line-up alongside Nemanja Matic in the middle of the park.

Ander Herrera is an option if Mourinho does decide to freshen things up but Marouane Fellaini is once again out as he continues to recover from a knee injury.

Attack: Playing Zlatan Ibrahimovic with Romelu Lukaku in attack together didn’t work against Burnley so I think we’ll see the Swedish legend drop back to the bench.

Jesse Lingard should be recalled to the starting eleven after coming off the bench to score twice against the Clarets while Marcus Rashford could keep his place in attack.

Anthony Martial is back in training after missing the Burnley game with a minor muscle injury so he could be recalled to add some spark to the United side while Henrikh Mkhitaryan will be hoping to feature at some point. 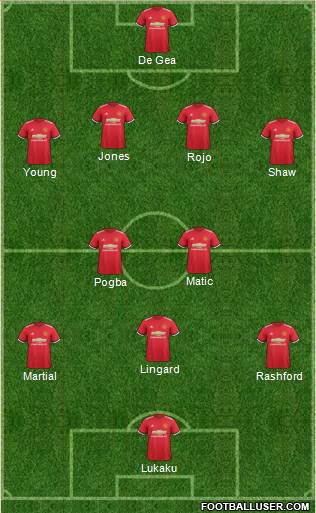