Players from Arsenal, Chelsea and Tottenham are included but it’s Liverpool who dominate the WhoScored? Premier League Team of the Week.

Players from Arsenal, Chelsea and Tottenham are included but it’s Liverpool who dominate the WhoScored? Premier League Team of the Week.

The Merseysiders thrashed Swansea City 5-0 at Anfield earlier this week with Roberto Firmino helping himself to a brace so it’s no surprise the Brazilian international has made the cut thanks to a score of 9.4.

Philippe Coutinho also continued his fine form with another goal and he’s actually the Player of the Week with a score of 9.9 while Trent Alexander-Arnold also makes the cut after getting himself on the score-sheet against the Swans.

Arsenal got back to winning ways with a 3-2 victory over Crystal Palace last night. Shkodran Mustafi opened the scoring and he makes the TOTW with a score of 8.4 while Alexis Sanchez scored two fine goals to earn a score of 9.8 to join Firmino in attack.

Tottenham put five past Southampton on Boxing Day and Dele Alli makes the TOTW with his goal-scoring performance earning him a score of 9.1. However, surprisingly, there is no place for Harry Kane as he only scored a 9.3 despite bagging a hat-trick.

Chelsea eased to a 2-0 victory over Brighton on Tuesday and Cesar Azpilicueta has been rewarded for another fine display by being included in the TOTW thanks to his score of 8.1.

Check out the full Team of the Week below: 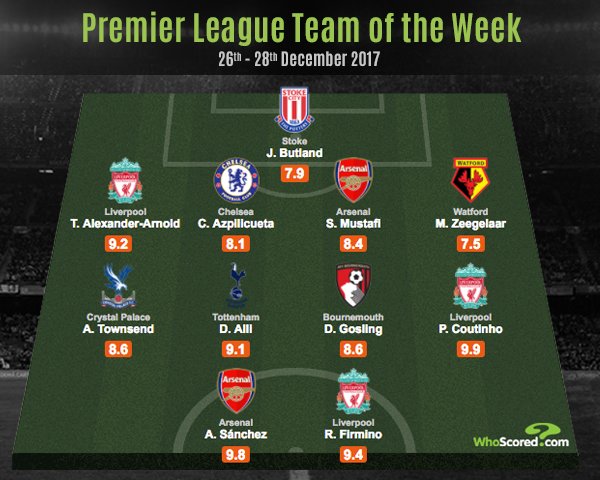