Arsenal take on West Brom at the Hawthorns on Sunday afternoon. Here is the side Gooner Mac thinks Arsene Wenger will select for the game:

Arsenal will be hoping to climb in to the top four of the Premier League when they take on West Brom at the Hawthorns on Sunday afternoon.

Goalkeeper: Petr Cech will have been disappointed to concede twice at Crystal Palace but neither goal was particularly his fault so I expect him to retain his place with David Ospina once again on the bench.

Defence: Wenger went to a back three at Selhurst Park and I think we might see him stick with that system in order to give us another body at the back to deal with West Brom at set pieces.

Calum Chambers did reasonably well against Wilfried Zaha but Rob Holding could be recalled tomorrow as he’s better in the air and more suited to cope with the threat posed by the hosts.

Nacho Monreal is once again missing due to an ankle injury so Laurent Koscielny should play on the left-side of the back three with Shkodran Mustafi once again in the middle.

Midfield: Granit Xhaka limped off during the closing stages of the win at Palace. There has been no update on his condition but I don’t think he’ll be risked with the Chelsea game coming up on Wednesday night. Francis Coquelin could therefore be recalled in midfield.

It will be interesting to see if Wenger risks Jack Wilshere as he faces the prospect of playing three Premier League games in just seven days. Jack insists he’s 100% fit but we all know how fragile his body can be.

However, with Aaron Ramsey injured the only viable option would be to play Mohamed Elneny if Wenger wanted to protect Wilshere and that’s unlikely if Xhaka isn’t fit to start.

Hector Bellerin has been coming under growing criticism for some inconsistent displays but I still feel the Spaniard is the best option in the right wing-back position so he should keep his place.

Wenger has suggested that Sead Kolasinac is best-suited to the wing-back role so he should start ahead of Ainsley Maitland-Niles if the boss sticks with a back three.

Attack: Alexis Sanchez was back in form with an excellent goal-scoring display against Palace so I expect we’ll see him starting in attack alongside Mesut Ozil once again.

Alexandre Lacazette extended his goalless streak to five games with a blank at Palace and looked frustrated to be subbed off yet again so I think we might see Wenger give the Frenchman a breather ahead of the Chelsea game.

Olivier Giroud has been ruled out with a hamstring injury which is a big blow as this is the type of game we need him for but Danny Welbeck is fit to start up front. 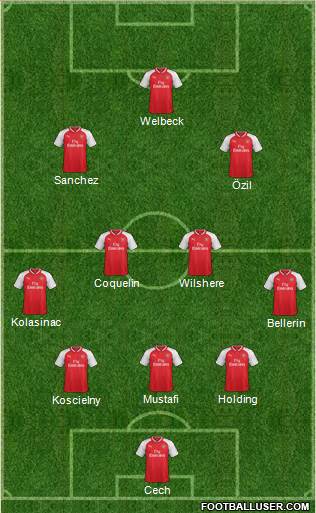