Manchester United and Liverpool have players included by it’s Chelsea who dominate the latest WhoScored? Premier League Team of the Week.

Manchester United and Liverpool have players included by it’s Chelsea who dominate the latest WhoScored? Premier League Team of the Week.

Liverpool are already back in action as they kick 2018 off with a trip to Burnley this afternoon just two days after coming from behind to beat Leicester City 2-1 at Anfield.

Mohamed Salah scored two fine goals for the Reds to secure the win but he didn’t do enough to make the TOTW as team-mate Roberto Firmino makes the cut thanks to his score of 7.4.

Man Utd were held to a disappointing 0-0 draw by Southampton at Old Trafford on Saturday afternoon and despite many feeling is was a poor performance from Jose Mourinho’s side, two of his players have still made the TOTW.

Ashley Young put-in another solid display at right-back to earn a score of 7.7 while midfielder Nemanja Matic also makes the cut after securing a score of 7.5.

However, it’s Chelsea who dominate the side with three of Antonio Conte’s men named in the Team of the Week after they thrashed Stoke City 5-0 at Stamford Bridge on Saturday afternoon.

Willian was in excellent form as he scored one and set-up two others during the rout to earn a score of 10.0 – which was the highest of any player over the weekend.

Midfielder Danny Drinkwater also scored a fine goal and makes the cut with a score of 8.5 while centre-back Antonio Rugier is in the team after scoring and keeping a clean sheet to also earn a score of 8.5. 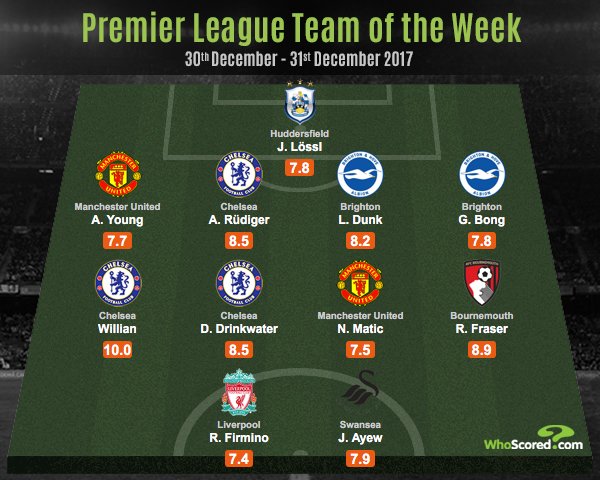