Tottenham take on West Ham at Wembley on Thursday night. Here is the side we think Mauricio Pochettino will select for the game:

Tottenham will look to close-in on the top four with a win when they take on West Ham at Wembley on Thursday night.

Goalkeeper: Michel Vorm should get a run-out in the FA Cup at the weekend but Hugo Lloris is almost certain to continue in goal against the Hammers tomorrow night.

Defence: Danny Rose has been ruled out for the foreseeable future after aggravating his troublesome knee problem so Ben Davies is expected to continue at left-back. However, we should see Pochettino once again rotate his right-backs with Serge Aurier coming in and Kieran Trippier given a breather.

Toby Alderweireld is still nursing a long-term hamstring injury so Davinson Sanchez should continue alongside Jan Vertonghen in the middle of defence with Juan Foyth offering back-up from the bench.

Midfield: Pochettino is set to freshen things up in the middle of the park as Spurs look to play their second game in just three days. Therefore, Harry Winks is expected to get a recall in midfield after being named on the bench for the win at Swansea.

Mousa Dembele is set to miss out after missing the trip to Wales on Tuesday night with a hip injury but we could see Victor Wanyama make his first start since August after making his comeback from injury with a second half cameo against Swansea.

Eric Dier could be given a well-earned breather in order to make room for the Kenyan international if Pochettino feels he’s ready to start.

Attack: Harry Kane was rested against the Swans after suffering from illness earlier this week but the striker came off the bench to create the second goal and is set to return to the starting eleven tomorrow.

That means Fernando Llorente should make way despite scoring the opening goal against his former club while Erik Lamela could also drop out after making a rare start last night.

Christian Eriksen and Heung-min Son should keep their places in attack along with Dele Alli – who got himself back among the goals with the second goal against Swansea. 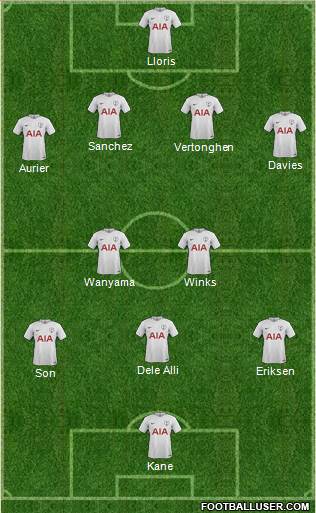