Chelsea take on Norwich City at Carrow Road on Saturday evening. Here is the side we think Antonio Conte will pick for the game:

Chelsea will look to book their place in the fourth round of the FA Cup when they take on Norwich City at Carrow Road on Saturday evening.

Goalkeeper: The Blues boss is expected to rotate his squad after the busy festive period so Willy Caballero could be given a run out in goal with Thibaut Courtois handed a well earned rest.

Defence: David Luiz is expected to be passed fit to return after taking part in full training this week having recovered from a knee injury so the Brazilian international could come back in to the defence.

Andreas Christensen would therefore be given a breather along with Gary Cahill as Antonio Rudiger should also get a recall at the back but Cesar Azpilicueta may be retained unless Conte wants to give one of the youngsters a chance.

Midfield: I think we’ll see a slight change in formation from the side that drew at Arsenal last night with Conte switching to two central midfielders at Carrow Road.

Cesc Fabregas and Tiemoue Bakayoko could make way with Danny Drinkwater coming in to start alongside his old Leicester City team mate N’Golo Kante in the middle of the park.

Davide Zappacosta should come in for Victor Moses in the right wing-back role while Marcos Alonso is due a rest so Kenedy could be given a chance on the left.

Attack: Eden Hazard was excellent once again at the Emirates on Wednesday night but Conte may take the opportunity to give his star man a well earned rest.

The formation change means Willian and Pedro can both be recalled after they were named on the bench against Arsenal while there could also be a recall for Michy Batshuayi up front.

Alvaro Morata had a nightmare in north London as he missed three excellent chances to get himself on the score-sheet so Conte may decide to give him a rest with Batshuayi leading the line in attack. 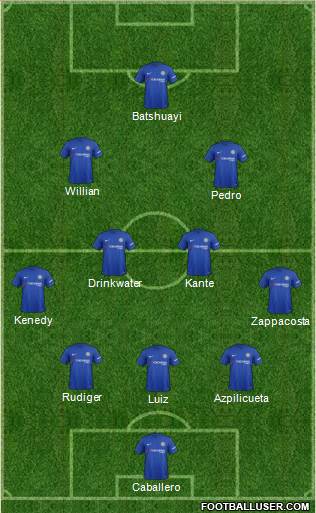