Piers Morgan has trolled Arsene Wenger after the Arsenal manager was handed a three-match touchline ban and a £40,000 fine by the Football Association. 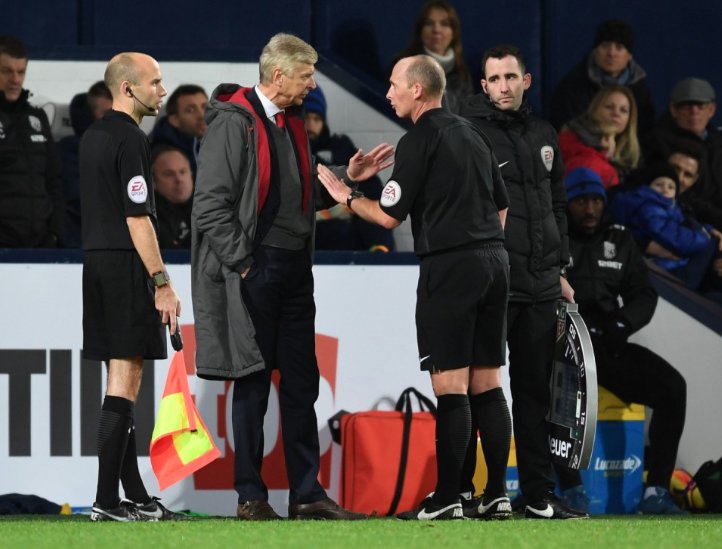 Piers Morgan has trolled Arsene Wenger after the Arsenal manager was handed a three-match touchline ban and a £40,000 fine by the Football Association.

Wenger was left furious after Mike Dean awarded West Bromwich Albion a controversial penalty during the closing stages of our match at the Hawthorns on New Year’s Eve.

The referee pointed to the spot after Kieran Gibbs had kicked the ball against the arm of Calum Chambers from close range and Jay Rodriguez converted the resulting penalty to salvage a 1-1 draw.

Wenger had words with Dean on the touchline and then confronted the referee again in the dressing room after the game where he used abusive language and questioned the referee’s integrity.

The Arsenal boss also made controversial comments during his post match press conferences and was charged by the FA with misconduct earlier this week.

Wenger admitted the charge at a hearing today and has been slapped with a three-match touchline ban and forced to pay a £40,000 fine. A statement on Arsenal.com read:

“Arsène Wenger will serve a touchline ban for Arsenal’s next three matches after he was charged with misconduct.

“It follows an Independent Regulatory Commission hearing today at which the Arsenal manager admitted that his language and behaviour in the match officials’ changing room after the West Bromwich Albion game on Sunday [31/12/17] was abusive, improper and questioned the integrity of the match referee. He was also fined £40,000.”

The ban means Wenger will not be on the touchline for Sunday’s FA Cup tie at Nottingham Forest, the first leg of our Carabao Cup semi final with Chelsea next Wednesday or the Premier League trip to Bournemouth.

Ordinarily, fans would be fuming at the thought of losing their manager for three games that could determine their season but one Arsenal supporter would like to see Wenger banned from the touchline for a lot longer than three matches.

Celebrity fan, Arsenal shareholder and season ticket holder, Piers Morgan, took to Twitter this afternoon to ask if Wenger’s ban could be extended to three years!

Can we make it a 3-year touchline ban? https://t.co/9hyxqgRksP

Morgan is a life-long Arsenal fan but he’s been in the #WengerOut camp for several years and has made those feelings perfectly clear on social media on a regular basis.