Arsenal take on Chelsea at Stamford Bridge in the first leg of their Carabao Cup semi-final tomorrow night. Here is the side Arsene Wenger might select

Arsenal will be looking to take a positive result back to the Emirates when they take on Chelsea at Stamford Bridge in the first leg of their Carabao Cup semi-final tomorrow night.

Goalkeeper: David Ospina has been Arsenal’s ‘cup keeper’ for the last two seasons, even in the Champions League, so I see no reason why Wenger wouldn’t stick with him in the League Cup. Therefore, Petr Cech may have to make-do with a place on the bench.

Defence: Wenger has played a back three in our last three games including our 2-2 Premier League draw with Chelsea at the Emirates last week so I think he’ll stick with that system tomorrow despite us having plenty of problems in defence.

Laurent Koscielny has once again been ruled out due to an on-going Achilles issue while Nacho Monreal is also unavailable as he’s still working his way back to fitness from an ankle injury.

There is some better news as Shkodran Mustafi looks to have passed a late fitness test after training today so the German international should return to the middle of the back three.

Calum Chambers and Rob Holding were given the nod in the league game last week and while they both endured a tough night, Wenger doesn’t have too many other options as Per Mertesacker was well short of his best on Sunday.

Midfield: We also have problems on the left as Sead Kolasinac remains out with an ankle injury so Ainsley Maitland-Niles is expected to once-again start in the wing-back role.

Aaron Ramsey remains out with a hamstring injury but Granit Xhaka is set to return after missing the defeat to Nottingham Forest with a minor groin problem.

The Swiss international should line-up alongside Jack Wilshere in midfield with Francis Coquelin and Mohamed Elneny unlikely to start amid rumours of them leaving the club this month.

Attack: Given our disappointment in the FA Cup at the weekend I expect Wenger will go with virtually his strongest side tomorrow as defeat to Chelsea would pile further pressure on his shoulders.

Alex Iwobi could be left out of the squad as punishment after being caught partying until the early hours before our trip to Nottingham while Theo Walcott and Danny Welbeck failed to take their chance to impress on Sunday.

Therefore, I expect Mesut Ozil and Alexandre Lacazette to be recalled tomorrow while Alexis Sanchez could also start despite on-going links with a move to Man City.

Olivier Giroud remains out with a hamstring injury so youngster Eddie Nketiah could be pushing for a place on the bench. 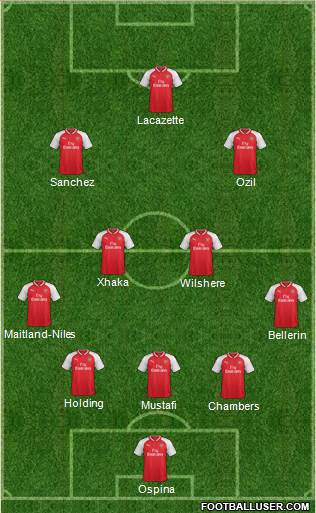