Arsenal entertain Crystal Palace at the Emirates on Saturday afternoon. Here is the side Gooner Mac thinks Arsene Wenger will select for the game:

Arsenal will look to get their push for the top four back on track with a win when we entertain Crystal Palace at the Emirates on Saturday afternoon.

Goalkeeper: Petr Cech is expected to keep his place in goal despite shipping two disappointing goals at Bournemouth last weekend. We need a new goalkeeper but for now Cech is the best we’ve got.

Defence: Wenger has played a back three in recent weeks and although I’m still not fully convinced by the system I think the boss will stick with it tomorrow.

Laurent Koscielny is back in contention after recovering from an Achilles injury so he’ll come straight back in to the side while Nacho Monreal is also due to return after overcoming an ankle injury that’s kept him out for the last month.

Calum Chambers and Rob Holding have failed to show their consistency in recent games so they should make way with Shkodran Mustafi the one to keep his place.

Midfield: Sead Kolasinac is back in the squad after recovering from an ankle injury and he may get an immediate recall as Ainsley Maitland-Niles is a major doubt with the flu.

Hector Bellerin will start on the opposite flank while Granit Xhaka should retain his place in the middle of the park. The big question is who will play with the Swiss international.

Ideally I’d love to see Jack Wilshere alongside Aaron Ramsey but I don’t see Wenger going with that pairing anytime soon so it’s one or the other tomorrow.

Obviously Rambo is an important player for us but Wilshere has been excellent during his absence and it would be harsh to drop him so Ramsey’s going to have to fight to regain his place.

Attack: The big question is whether Henrikh Mkhitaryan and Alexis Sanchez will complete their proposed swap in time to make their debuts for their new clubs. They have to be registered by 12pm today to be eligible this weekend and [at the time of writing] no deal is in sight yet so we have to assume there will be no Mkhitaryan this weekend.

I do think the deal might go through late on Friday or over the weekend so it’s almost certain that Sanchez won’t be playing in an Arsenal shirt again.

Mesut Ozil is expected to recover from a knee injury so he should return in attack while I hope Wenger goes with Danny Welbeck ahead of Alex Iwobi as the Nigerian has been poor of  late.

Alex Lacazette will be desperate to end his goal drought and he should lead the line up front once again but Olivier Giroud remains out with a hamstring injury. Obviously there is no Theo Walcott as he’s completed his move to Everton. 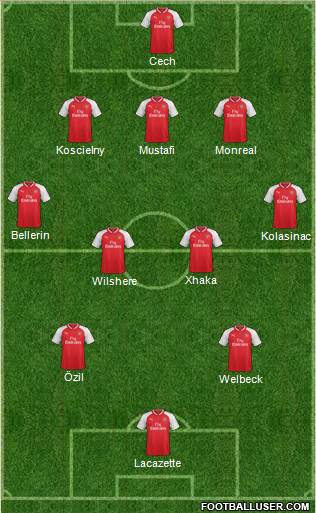