Chelsea will look to keep the pressure on Man Utd when they take on Brighton on Saturday. Here is the side we think Antonio Conte will pick for the game:

Chelsea will look to keep the pressure on Man Utd with a win when they take on Brighton on Saturday afternoon.

Goalkeeper: Willy Caballero got a run-out during the FA Cup penalty shoot-out win over Norwich in midweek but Thibaut Courtois will be recalled tomorrow.

Defence: Gary Cahill has been ruled out with a hamstring injury so Antonio Rudiger should start on the left side of the back three with youngster Ethan Ampadu making way.

David Luiz could also drop back to the bench as Andreas Christensen is expected to come straight back in to the side after being rested against Norwich but Cesar Azpilicueta should keep his place.

Midfield: Cesc Fabregas has been ruled out with a hamstring problem but N’Golo Kante is certain to be recalled following his substitute appearance in the FA Cup match.

Tiemoue Bakayoko has been inconsistent of late but I think he’ll keep his place ahead of Danny Drinkwater with the former Leicester midfielder dropping to the bench.

Davide Zappacosta and Kenedy are likely to make way as Victor Moses and Marcos Alonso are in-line for recalls to the starting eleven.

New signing Ross Barkley came through a behind-closed-doors friendly yesterday and Conte says he’ll be in the squad tomorrow but a place on the bench is the best he can realistically hope for.

Attack: Conte has problems in attack as Alvaro Morata and Pedro are both suspended following their dismissals against Norwich on Wednesday night.

Michy Batshuayi has rarely been used in the league so Eden Hazard could be deployed as a makeshift No.9 but given the lack of options in midfield and attack I think we could see Batshuayi retained up front.

That would leave Hazard free to take his more natural place in attack with Willian joining him in support. 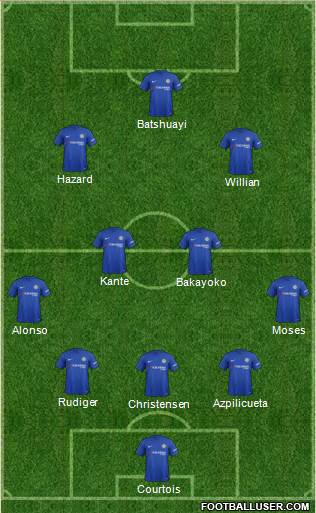