Liverpool take on West Brom at Anfield on Saturday night. Here is the side I think Jurgen Klopp will select for the game:

Liverpool will be looking to book their place in the fifth round of the FA Cup when they take on West Brom at Anfield on Saturday night.

Goalkeeper: Loris Karius has been installed as Liverpool’s number one so I think Klopp will give the young German a run of games to establish himself. Therefore, Simon Mignolet will have to make-do with a place on the bench again.

Defence: Alberto Moreno could be in-line to make his comeback as he’s built-up his fitness in training this week having recently recovered from an ankle injury so Andrew Robertson may be given a rest after some impressive displays recently.

Trent Alexander-Arnold should get a recall at right-back with Joe Gomez making way but I think Klopp may stick with Joel Matip alongside Virgil van Dijk as he’ll want them to build up a partnership in the middle of defence.

So Dejan Lovren and Ragnar Klavan may have to make-do with places on the bench this weekend.

Midfield: Jordan Henderson is expected to be back in contention after recovering from a hamstring injury so the skipper may come back in to the side against West Brom.

That could see Emre Can moved in to a more advanced position in midfield while Adam Lallana could get a recall with Alex Oxlade-Chamberlain and Gini Wijnaldum rested after starting the last two games.

Attack: Klopp could be tempted to mix things up in attack to give his forwards a breather ahead of Tuesday’s Premier League trip to Huddersfield Town.

However, with Daniel Sturridge expected to secure a move away this month and no replacement for Philippe Coutinho signed yet Klopp doesn’t have too many options in the final third.

Plus, this is an important game as the FA Cup is a realistic trophy for Liverpool to win this season so I think we’ll see Mohamed Salah and Sadio Mane once again supporting Roberto Firmino in attack. 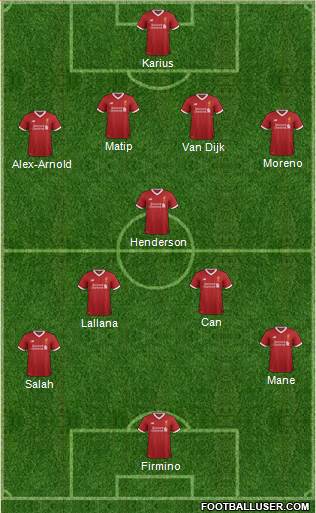