Tottenham take on Newport County on Saturday evening. Here is the side we think Mauricio Pochettino will select for the game:

Tottenham will be looking to book their place in the fifth round of the FA Cup when they take on Newport County at Rodney Parade on Saturday evening.

Goalkeeper: Hugo Lloris missed the draw at Southampton last weekend due to illness and although he’s now back in training I think Pochettino will stick with Michel Vorm in this FA Cup tie.

Defence: Danny Rose is slowly making his way back to full fitness following his latest knee complaint but this game is likely to come too soon so Ben Davies should continue at left-back.

Serge Aurier picked up a calf problem last weekend so Keiran Trippier is expected to get a recall at right-back. Pochettino may give youngster Juan Foyth a chance to impress in the middle of defence with Davinson Sanchez the man most likely to make way so Jan Vertonghen should keep his place.

Toby Alderweireld returned to full training this week after recovering from a hamstring injury and will be assessed at training tomorrow but Pochettino has hinted this game will come too soon for the Belgian.

Midfield: Victor Wanyama could be given a recall to help build on his match fitness after an injury plagued campaign with Eric Dier given a well earned breather.

Harry Winks is still struggling with an ankle injury while Mousa Dembele could get a rest so Moussa Sissoko could line-up alongside Wanyama in the middle of the park.

Attack: Pochettino is expected to give Harry Kane a rest against Newport so Fernando Llorente may be given the chance to impress against the League Two minnows.

Erik Lamela is a doubt with a buttock injury but Christian Eriksen is back in contention after recovering from illness that kept him out of the Southampton match last time out.

The Danish international should be recalled to start alongside Dele Alli and Heung-min Son in attack this weekend. 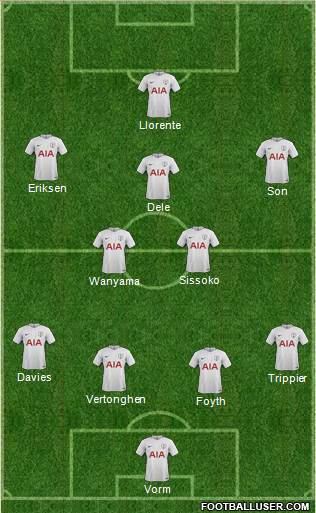