Arsenal take on Swansea City at the Liberty Stadium tomorrow night. Here is the side Gooner Mac thinks Arsene Wenger will select for the game:

Arsenal will be looking to get their top four push back on track when they take on Swansea City at the Liberty Stadium tomorrow night.

Goalkeeper: David Ospina kept goal for the Carabao Cup victory over Chelsea last week but Petr Cech is expected to be recalled between the sticks tomorrow night.

Defence: Wenger has started with a back four in our last two games and although he switched to a back three in the second half against Chelsea, I still think we’ll go with a four against Swansea.

Nacho Monreal was excellent against the Blues so he should keep his place ahead of Sead Kolasinac and Ainsley Maitland-Niles while Hector Bellerin is a cert to start at right-back.

Laurent Koscielny should keep his place in the middle of defence as he’s had a week’s rest since the Chelsea game while Shkodran Mustafi will no doubt keep his place ahead of Rob Holding and Calum Chambers.

Midfield: Mohamed Elneny has done a solid job in recent games but I think we might see Wenger go with a more familiar line-up with Aaron Ramsey recalled to start alongside Granit Xhaka in midfield.

It’s difficult to leave Jack Wilshere out right now so I think we’ll see the Englishman keep his place once again. Wenger might deploy Jack in a slightly more advanced role in front of Xhaka and Ramsey when we’re in possession but ask him to drop back in to a three-man midfield when we lose the ball.

Attack: All eyes will be on Wenger to see if he’ll hand Henrikh Mkhitaryan his debut after he was ineligible to face Chelsea last week. The Armenian international should be fresh so I see no reason why he won’t start tomorrow as Alex Iwobi has been inconsistent lately.

Mesut Ozil has produced some superb form in recent games so obviously he’ll keep his place unless he picks up a late injury while Alexandre Lacazette will lead the line up front.

The Frenchman could soon be under pressure with the impending arrival of Pierre-Emerick Aubameyang so he’ll be looking to impress Wenger against Swansea tomorrow. 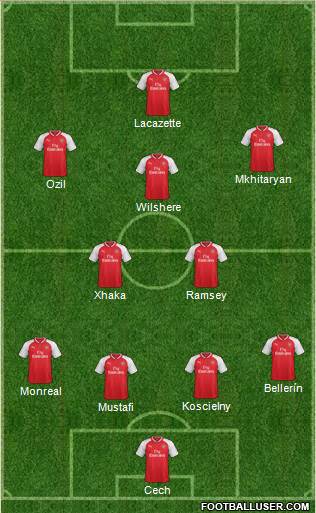