Liverpool take on Huddersfield Town on Tuesday night. Here is the side I think Jurgen Klopp will select for the game:

Liverpool will look to put their FA Cup disappointment behind them and get back to winning ways when they take on Huddersfield Town on Tuesday night.

Goalkeeper: Simon Mignolet returned for the 3-2 defeat to West Brom at the weekend but Loris Karius is expected to be recalled as Klopp has suggested the German youngster is his new number one.

Defence: I think we’ll see a couple of changes in defence after the Reds shipped three goals at home on Saturday night with Joe Gomez expected to replace Trent Alexander-Arnold at right-back.

Andrew Robertson could also return at left-back after being rested at the weekend and Alberto Moreno could make way after starting his first game in six weeks on Saturday.

Klopp will be looking for improvement from his defence but I think he’ll stick with Joel Matip alongside Virgil van Dijk in the back four with Dejan Lovren on the bench. Ragnar Klavan remains out with a muscle injury.

Midfield: Jordan Henderson made his return as a second half substitute at the weekend and is pushing for a recall but I think Klopp might continue to ease his skipper back in to action from the bench.

Therefore, Emre Can could continue in the holding midfield role with Gini Wijnaldum also keeping his place in the middle of the park. Adam Lallana has been ruled out with a minor muscle problem so Alex Oxlade-Chamberlain could once again start.

Attack: Klopp may be tempted to freshen things up in attack but he doesn’t really have too many viable options for what is a must-win game so I think we’ll see his usual front three keep their place.

Roberto Firmino should once again lead the line up front and he’ll be looking to make-up for his penalty miss on Saturday while Sadio Mane will continue to support in attack.

Mohamed Salah was once again on the score-sheet last time out and he’ll be looking to continue his sensational form with the likes of Dominic Solanke and Danny Ings on the bench.

Daniel Sturridge looks set for a move to West Brom so he’s unlikely to be involved tomorrow night. 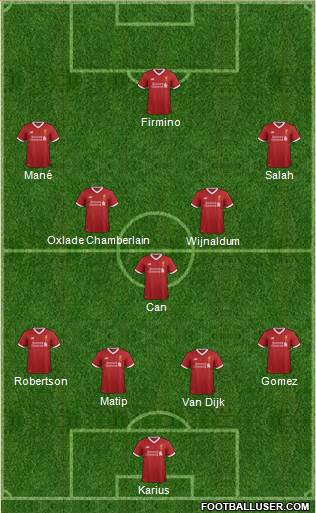