The draw for the fifth round of the FA Cup has been conducted this evening and Chelsea, Man Utd, Tottenham and Man City have all avoided each other

The draw for the fifth round of the FA Cup has been conducted this evening and all the big boys have once again avoided each other.

Manchester United eased in to the next stage of the competition after beating Yeovil Town 4-0 on Friday night and Jose Mourinho’s men have been drawn away to the winner of Huddersfield or Birmingham.

Chelsea also booked their place in the fifth round with a comfortable 3-0 victory over Newcastle United at Stamford Bridge and the Blues will now entertain Championship side Hull City.

Manchester City made it comfortably through the fourth round after beating Cardiff City 2-0 on Sunday afternoon and Pep Guardiola’s side will now take on Wigan at the DW Stadium in the next phase.

Tottenham face a replay after being held to a shock 1-1 draw at Newport County on Saturday evening but they will almost certainly beat the League Two minnows at home and the north Londoners will then face an away trip to either Millwall or Rochdale.

So all the big clubs managed to avoid each other and Chelsea, United, City and Spurs should all be confident of progressing to the quarter finals of the FA Cup.

The ties will be played on the weekend of the 16/19th of February. 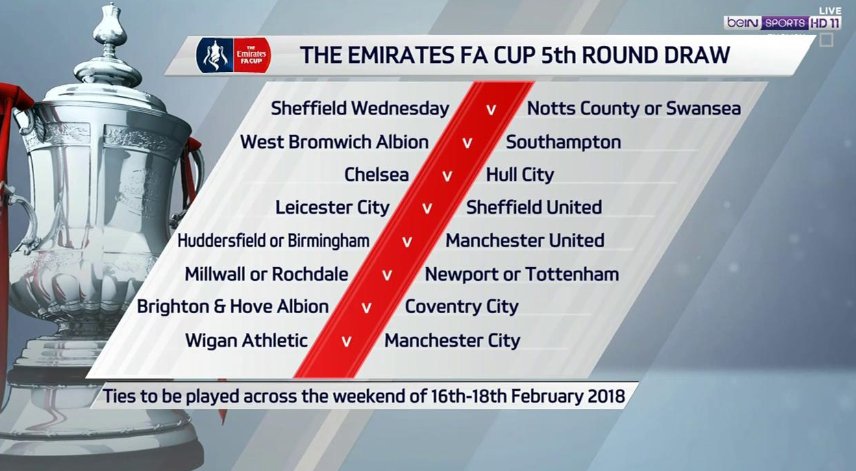