Arsenal take on Ostersunds in the Europa League tomorrow night. Here is the side Gooner Mac thinks Arsene Wenger will select for the game:

Arsenal will be looking to come home with a positive result from the first leg of our Europa League last-32 clash with Ostersunds in Sweden tomorrow night.

Goalkeeper: Petr Cech hasn’t travelled for the game so David Ospina is set to start in goal with Ryan Macey offering support from the bench.

Defence: Wenger has also decided not to risk Laurent Koscielny’s troublesome Achilles injury on the artificial pitch so there is an opening to fill in the middle of defence.

I think Rob Holding could get the nod ahead of Calum Chambers but otherwise I expect our first choice team to be played as we have no game at the weekend and this is a vital match for our season.

Therefore, I expect Shkodran Mustafi to once again start in the middle of the back four with Nacho Monreal and Hector Bellerin in the full-back positions.

Midfield: Jack Wilshere has been left in north London as he’s still not 100% following a sickness bug while Aaron Ramsey has been ruled out of both legs against Ostensunds with a groin injury.

Granit Xhaka is expected to start while Mohamed Elneny could keep his place in front of the back four. I’d like to see Ainsley Maitland-Niles given a chance in midfield but he may have to make do with a place on the bench.

Attack: We have problems up front as Alexandre Lacazette has been ruled out for up to six weeks following knee surgery while Pierre-Emerick Aubameyang is ineligible in the Europa League.

So Wenger has little choice other than to start Danny Welbeck up front with youngster Eddie Nketiah our back-up option from the bench.

Henrikh Mkhitaryan can play in Europe so I expect he will continue in attack and he’ll be looking to return to form after a disappointing outing against Tottenham at the weekend.

Wenger has confirmed Mesut Ozil will start and it will be interesting to see how he plays in freezing conditions tomorrow while Alex Iwobi is favourite to join the German international in attack with Reiss Nelson on the bench. 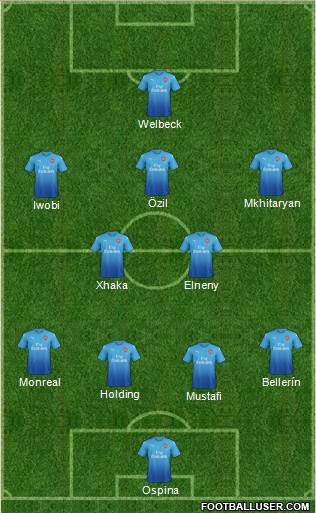