Tottenham take on Juventus at Wembley on Wednesday night. Here is the side we think Mauricio Pochettino will select for the game:

Tottenham will be looking to book their place in the quarter finals of the Champions League when they take on Juventus at Wembley on Wednesday night.

Goalkeeper: Hugo Lloris is one of the first names on the team sheet and is certain to keep his place in goal, barring a late injury.

Defence: Toby Alderweireld is continuing to work his way back to full fitness following a hamstring problem and the Belgian international isn’t expected to feature tomorrow night.

Therefore, Davinson Sanchez should once again continue alongside Jan Vertonghen in the middle of the back four against the Italian giants.

However, Pochettino is expected to stick with his policy of rotating his full-backs so we should see Kieran Tripper come in for Serge Aurier at right-back while Danny Rose could replace Ben Davies on the opposite side.

Midfield: I was surprised to see Mousa Dembele start against Huddersfield at the weekend but I’d be equally shocked if he was left out against Juventus after recent praise from Pochettino.

So I think we’ll see Dembele continue alongside Eric Dier in defence with the likes of Victor Wanyama and Harry Winks battling for a place on the bench.

Attack: I suspect Pochettino planned to recall Erik Lamela for this game as the Argentine started in the first leg and was rested at the weekend against Huddersfield.

However, it will be difficult to drop Hueng-min Son as he’s in excellent form having scored four goals in his last two games so I think the South Korean could get the nod tomorrow night.

Christian Eriksen will no doubt keep his place in attack while Dele Alli should also be retained so the duo are expected to once again support Harry Kane up front.

Fernando Llorente didn’t feature against Huddersfield on Saturday but he should return to the squad tomorrow and he’ll be looking to build on his hat-trick against Rochdale last week if he’s given the chance from the bench. 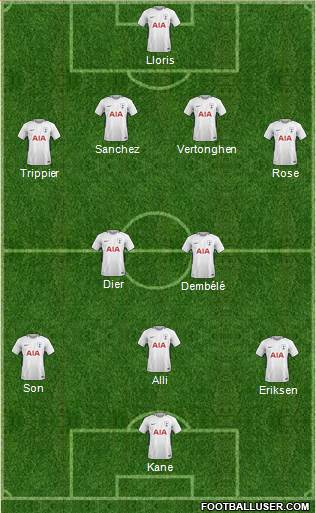