Arsenal, Chelsea and Tottenham are ready to do-battle over a bargain £6.7m deal to sign highly-rated Hamburg star Jann-Fiete Arp this summer

The transfer window is closed but managers are working hard on their plans for the summer so we’ll bring you all the latest gossip from around the globe. Today, several English clubs are linked with Jann-Fiete Arp… 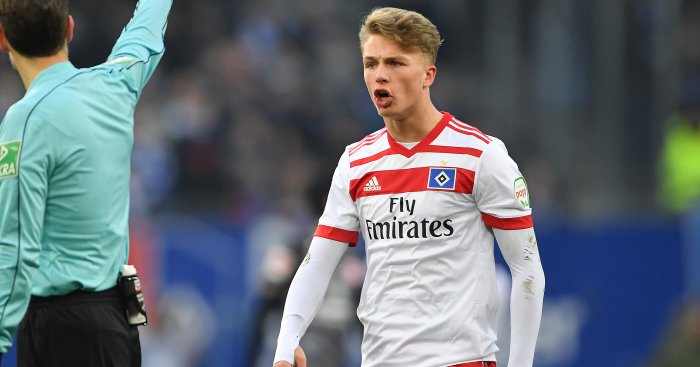 Arsenal, Chelsea and Tottenham are ready to do-battle over a bargain £6.7m deal to sign highly-rated Hamburg star Jann-Fiete Arp this summer, according to a report by TeamTalk.

Arp joined Hamburg as a child in 2010 and has progressed through the youth system to emerge as one of the most promising young players in German football.

The 18-year-old broke in to the first team set-up earlier this season and has scored 2 goals in his 14 appearances so far including a strike during the defeat to Hertha Berlin in October which made him the first player born this century to score a goal in the Bundesliga.

The striker has also scored an impressive 15 goals in 17 appearances for the German U17’s and it seems his potential has alerted a number of top clubs here in the Premier League.

TeamTalk claim that Arsenal, Chelsea and Tottenham are among the clubs showing a keen interest in signing Arp and the London trio look set to do-battle over his signature this summer.

The report says Chelsea tried to sign Arp last summer but the teenager decided to stay with Hamburg for another season in order to gain more first team experience and continue his development.

However, he looks set for a move this summer as TeamTalk are citing Bild as saying that Arp is almost certain to leave Hamburg if they are relegated and will be available for just £6.7m. Hamburg are currently second bottom of the Bundesliga table and seven points from safety so it looks increasingly likely they’ll drop to the second tier at the end of the season.

No doubt many of their key players will look for a move if they do drop to Bundesliga 2 and the report suggests that Arp will be among them with a move to England on the cards.

The young German looks like he has a bright future ahead of him, however, there’s virtually no chance he’ll be considered a first team regular at the likes of Arsenal, Chelsea or Tottenham just yet so he’ll have to bide his time if he does opt to join one of the London giants this summer.