Arsenal take on AC Milan in the Europa League at the San Siro on Thursday night. Here is the side Gooner Mac thinks Arsene Wenger will select for the game:

Arsenal will look to get back to winning ways when we take on AC Milan in the first leg of our Europa League last-16 clash at the San Siro on Thursday night.

Goalkeeper: David Ospina is set to be recalled as he’s been our regular cup goalkeeper this season. Petr Cech has travelled to Milan so he’ll be on the bench.

Defence: We’ve been dealt a huge blow with the news that Hector Bellerin has been ruled out with a knee injury so Calum Chambers is expected to keep his place at right-back after deputising against Brighton at the weekend.

Nacho Monreal returned to light training today after recovering from a back injury that’s kept him out of the last two games but the Spaniard is still not match fit so has been left back in north London.

Sead Kolasinac will therefore keep his place at left-back while Shkodran Mustafi is expected to once again start alongside Laurent Koscielny in the middle of defence.

Midfield: Aaron Ramsey was rested for the defeat at Brighton last weekend so the Welsh international is set for a recall in midfield tomorrow night.

Jack Wilshere could keep his place in the middle of the park while Granit Xhaka is also expected to be retained despite his disappointing form in recent weeks.

Attack: Pierre-Emerick Aubameyang hasn’t travelled to Milan as he’s ineligible in the Europa League while Alexandre Lacazette has once again been ruled out with a knee injury.

Therefore, Danny Welbeck is set to get a recall up front and the striker will be hoping to put in a more positive display after failing to impress in recent games.

Henrikh Mkhitaryan is eligible to play in the Europa League so I expect the Armenian international will keep his place despite a disappointing start to life at Arsenal following his January move from Man Utd.

Mesut Ozil has been hugely ineffective since signing his big-money contract so it’s time our German playmaker starts to show why he deserves to be the highest paid player in the clubs history.

Youngster Eddie Nketiah is in the squad so he’ll be an option from the bench along with Alex Iwobi and Reiss Nelson. 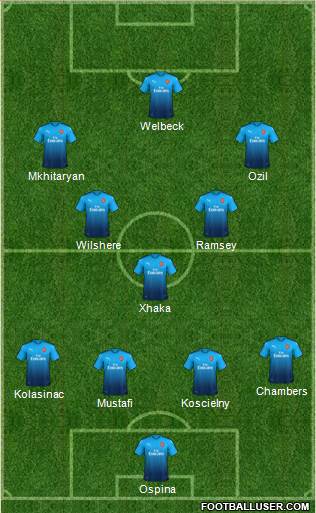