Mauricio Pochettino has offered an update on the fitness of Harry Kane, Dele Alli and Danny Rose following Tottenham’s victory at Bournemouth this evening.

Mauricio Pochettino has offered an update on the fitness of Harry Kane, Dele Alli and Danny Rose following Tottenham’s victory at Bournemouth this evening.

Spurs climbed up to third in the Premier League table with goals from Alli, Heung-min Son [2] and Serge Aurier sealing a 4-1 comeback win at Dean Court.

However, the victory was overshadowed by an injury to Kane as the striker limped off midway through the first half after twisting his ankle while scoring an offside goal.

Pochettino confirmed the injury is to the same ankle that kept Kane out for two months earlier in the season but they are hoping the problem won’t be as serious this time around.

The England international is due to have a scan tomorrow to determine the full extent of the injury so Tottenham will be praying for positive news when the results come back.

However, it will be a concern to Spurs fans to see Kane leaving Dean Court on crutches and wearing a protective boot after the game today. [Picture below]

Rose was replaced by Kieran Trippier in the 81st minute sparking fears he may have aggravated a knee injury that’s hampered him all season but the Spurs boss confirmed he withdrew the full-back due to fatigue. 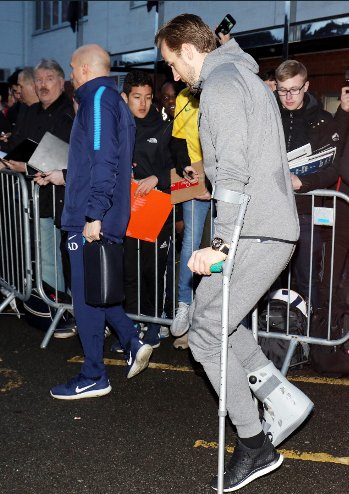 Alli was also substituted during the closing stages of the game after picking up a knock and the midfielder will also be assessed tomorrow but Pochettino is confident it isn’t a major issue.

Pochettino is quoted by Football London as saying:

On Rose:
It was just fatigue. Not an injury.

On Alli:
I don’t believe it will be a big issue. We will have to assess it tomorrow, the same with Harry.

We’ll have to wait for the scan result to come back but Tottenham will be praying for positive news on Kane and Alli as it would be a huge blow if they were to lose two of their key men during the closing stages of the season.