Manchester United take on Sevilla at Old Trafford on Tuesday night. Here is the team I think Jose Mourinho will pick for the game:

Manchester United will be looking to book their place in the quarter finals of the Champions League when they take on Sevilla at Old Trafford on Tuesday night.

Goalkeeper: David De Gea has been in sensational form all season and United have him to thank for securing a 0-0 draw in the first leg so no doubt he’ll keep his place tomorrow.

Defence: Eric Bailly made his long awaited return to the starting eleven at the weekend and despite scoring an own goal, the Ivorian looked in good form. However, it was his first start in over three months so Mourinho may be reluctant to start him again so soon.

Therefore, with Phil Jones and Marcos Rojo still unavailable due to injury, Victor Lindelof could be recalled alongside Chris Smalling in the middle of defence.

Antonio Valencia is almost certain to keep his place at right-back while I expect Ashley Young to once again start ahead of Luke Shaw on the left.

Midfield: Paul Pogba missed the win over Liverpool at the weekend after suffering a nasty cut to his leg in training on Friday. The French international took part in some of the training session today and I think he’ll be passed fit to start tomorrow.

Juan Mata is the man likely to make way as youngster Scott McTominay has played his way in to Mourinho’s starting eleven with some mature display’s recently while Nemanja Matic should once again start in the holding role.

Attack: Marcus Rashford returned to the starting eleven with a bang as he scored both goals against Liverpool at the weekend and I’d be shocked if he didn’t keep his place after such an impressive performance.

Anthony Martial is back in contention after resuming full training today but Alexis Sanchez is expected to keep his place in attack despite not hitting top form yet following his January move from Arsenal.

Romelu Lukaku was a real handful against Liverpool on Saturday and had a hand in both goals so no doubt the Belgian international will continue to lead the line up front.

Zlatan Ibrahimovic is back in full training after recovering from a knee injury but a place on the bench is the best he can hope for. 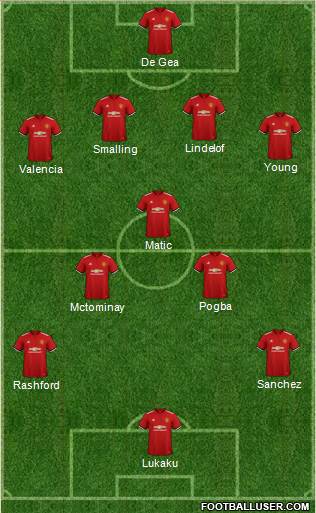