Chelsea head to the Nou Camp looking to beat Barcelona to book their place in the last-8 of the Champions League. Here is the side we think Conte will pick

Chelsea face a daunting task as they head to the Nou Camp looking to beat Barcelona to book their place in the quarter finals of the Champions League.

Goalkeeper: Thibaut Courtois is certain to once again keep his place between the sticks tomorrow with Willy Caballero on the bench.

Defence: Skipper Gary Cahill was recalled for the win over Crystal Palace at the weekend but Antonio Rudiger is back in contention after recovering from a knock.

I think the German international will be given the nod so Cahill is the man expected to make way with Andreas Christensen and Cesar Azpilicueta keeping their places.

The back three have the unenviable task of trying to stifle the likes of Lionel Messi, Luis Suarez and Philippe Coutinho so they better be on top form tomorrow night.

Midfield: N’Golo Kante made a successful return to the side at the weekend and no doubt the French international will keep his place in midfield at the Nou Camp.

Danny Drinkwater and Tiemoue Bakayoko are pushing for recalls but I think Conte will stick with Cesc Fabregas and he’ll be looking to impress against his boyhood club.

Victor Moses is set for a recall in the right wing-back position so he should replace Davide Zappacosta while Marcos Alonso is also expected to keep his place meaning Emerson Palmeiri will be on the bench.

Attack: The big decision for Conte is how he’ll set-up in attack. Olivier Giroud impressed against Palace at the weekend but he’s deployed Eden Hazard in a ‘false 9’ role in the big games this season.

He went with that system during the 1-1 first leg at Stamford Bridge so I wouldn’t be surprised to see Hazard up front with Pedro and Willian offering support.

That means Giroud will drop to the bench where he’ll be joined by Alvaro Morata – who’s struggled to hold down a regular starting spot in recent weeks. 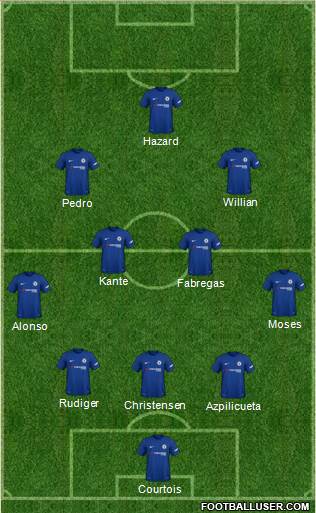