Manchester United take on Brighton at Old Trafford on Saturday night. Here is the team I think Jose Mourinho will pick for the game:

Manchester United will be looking to book their place in the semi finals of the FA Cup when they take on Brighton at Old Trafford on Saturday night.

Goalkeeper: Sergio Romero has been selected in the previous rounds of the competition so I think we could see David De Gea given a rest tomorrow with the Argentinean coming in between the sticks.

Defence: Eric Bailly has made an impressive return to the starting eleven since being recalled in recent games so I expect we’ll see the Ivory Coast international keep his place at the back.

However, Mourinho might be tempted to recall Victor Lindelof with Chris Smalling dropping out but Phil Jones, Daley Blind and Marcos Rojo all remain sidelined through injury.

Antonio Valencia is almost certain to keep his place at right-back but Luke Shaw could be recalled on the left with Ashley Young given a breather.

Midfield: Paul Pogba was criticised for his performance after coming off the bench during the Champions League defeat to Sevilla in midweek but I still think we could see the French international recalled in midfield.

Marouane Fellaini is likely to make way while Scott McTominay could come in alongside Nemanja Matic in the middle of the park with Jesse Lingard dropping out.

Attack: Alexis Sanchez produced another hugely disappointing performance in midweek so I think we could see the Chilean international dropping to the bench tomorrow night.

Anthony Martial is pushing for a recall so he could start on the left while Juan Mata may come in for Marcus Rashford on the opposite flank.

Romelu Lukaku got himself on the scoresheet during the defeat to Sevilla so I expect the Belgian international to keep his place up front. Zlatan Ibrahimovic is still working on his fitness following a knee injury so he’s not in contention just yet. 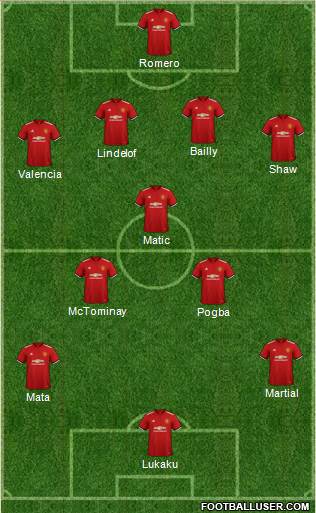