Goalkeeper: Sergio Romero played in the FA Cup win over Brighton before the break but he picked up a knock while away with Argentina and David De Gea is expected to be recalled this weekend.

Defence: Eric Bailly has made an impressive return to the starting eleven since returning to full fitness so I expect he’ll continue at the back with Chris Smalling favourite to keep his place ahead of Victor Lindelof.

Marcos Rojo is also pushing for a recall after returning from injury but Phil Jones is once again set to miss out with a problem that’s kept him out for over two months.

Antonio Valencia should retain his place at right-back while Ashley Young is expected to be fit to start at left-back despite picking up a knock during England’s draw with Italy on Tuesday.

Midfield: All eyes will be on Mourinho to see if he picks Paul Pogba amid reports of a bust-up between the two men but I think we’ll see the French star return to the starting eleven against Swansea.

Scott McTominay is a doubt after sustaining an injury while away with Scotland but Ander Herrera and Marouane Fellaini are both fit and available for selection.

However, I think we might see Mourinho play Jesse Lingard in a central role that will see him support Pogba ahead of Matic in a midfield trio.

Attack: Alexis Sanchez was benched for the FA Cup win over Brighton last time out but I think the Chilean international will be back in the starting eleven on Saturday.

Anthony Martial recovered from an ankle problem to play for France in midweek but Marcus Rashford could be favourite to start in attack ahead of Martial and Juan Mata.

Romelu Lukaku has been back among the goals for club and country in recent weeks so no doubt the Belgian international will once again lead the line up front against Swansea. 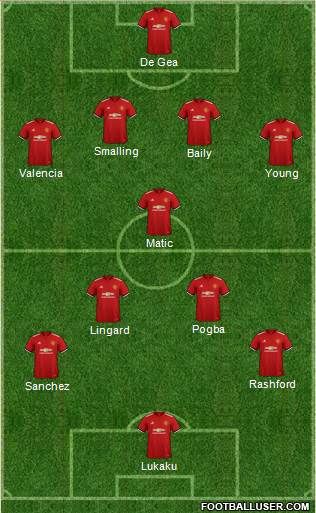